“The modern girl sees the dawn of a new day. Women at the editor’s desk, women teaching in college, women healing the sick, women practicing in the courts, women preaching from the pulpit and lecturing from the platform—call them new women or what you please—they are the women the world welcomes today.”
Susan B. Anthony, 1905

The Anthony Center’s awards honor leading women at the University of Rochester and in the wider world. At the annual Susan B. Anthony Legacy Event, we celebrate one woman’s achievements with the Susan B. Anthony Lifetime Achievement Award. 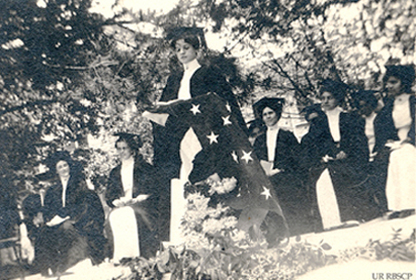 100 Years of Educating Women at the University of Rochester

In 2000, to help commemorate the 100th anniversary of women’s admission to the University of Rochester, the University honored ten women, one for each decade of co-education:

1900
Mary Frances Smith Edgerly ’05 (PhB)* – Miss Edgerly was one of the first four women to receive a science degree (awarded to women only as a PhB). She was among the first women graduates of the University and a protégé of Susan B. Anthony. A non-traditional woman in many respects, she had a passion for mathematics and sports, ran a successful lumber business, and advocated for social change throughout her long life.

1910
Norma B. (Storey) Spinning ’18 (BA)* – Miss Spinning combined commitment to the advancement of women with a successful teaching career in Rochester. She served on the University Board of Trustees from 1960-1966, and held leadership positions in the ASUW, League of Women Voters, and the Women’s Community Civic Association.

1920
Helen W. (Foulkes) Sykes ’20 (BA)* – Extremely active volunteer who worked tirelessly in service to the Rochester community, Ms. Sykes served on the board of Highland Hospital. She also helped to lead the American Red Cross, the Girl Scouts of America, the League of Women Voters, and the Memorial Art Gallery.

1930
Mary Steichen Calderone ’39M (MD)* – Dr. Calderone pioneered sex education in America. She also researched and wrote extensively in the field of human sexuality and is a member of the National Women’s Hall of Fame.

1940
Virginia Dwyer ’43 (PhD)* – Dr. Dwyer was once described as “the most courted woman on Wall Street.” During her 43-year career at AT&T, she influenced key financial decisions and, as senior vice president for finance, was the highest ranked female executive in the U.S.

1950
Florence Cawthorne Ladd ’58 (PhD) – As a noted psychologist, teacher and director of the Bunting Institute at Harvard’s Radcliffe College, Dr. Ladd has been a powerful spokesperson on crucial issues such as gender and racial equality.

1960
Lynn McCracken Daucher ’68 – Ms. Duacher represents the 72nd Assembly District in Orange County, California. She has enjoyed a long and distinguished career in government and public service, serving as a member of the City Council and the School Board of Brea, California, and as its mayor from 1997-1998.

1970
Ilene Busch-Vishniac ’76 – Professor Busch-Vishniac is a dynamic and energetic leader with a strong research and academic background. She served as Dean of Engineering at Johns Hopkins University, a rank in engineering position shared by only nine other women in the country and now serves as President of the University of Saskatchewan.

1980
Siobhan Marie Mullen ’83 – Dr. Mullen holds a degree in applied mathematics and is described by colleagues as a “super achiever.” She worked with NASA and Honeywell as an astrophysicist and founding president of AKJUIT Aerospace, where she manages Spaceport Canada, a $250 million satellite development project.

1990
Beth Olearczyk ’94 – Ms. Olearczyk received a B.A. in Women’s Studies and was awarded several undergraduate fellowships to support her feminist research in English and history. After graduation, she worked as a public policy advocate for child welfare and earned her MD from Columbia University College of Physicians and Surgeons. She currently works at Bassett Medical Center in Cooperstown, NY.