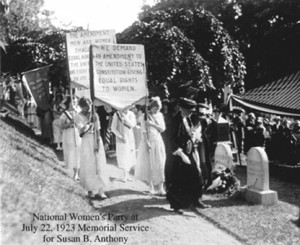 Susan B. Anthony Lifetime Achievement Award
The Susan B. Anthony Lifetime Achievement Award was established in 1997 by the Susan B. Anthony Center to honor and celebrate women whose lives have been enriched by their years at the University of Rochester and who have, in turn, inspired other women to advance and lead. Nominees are faculty, staff, trustees and/or alumnae who have achieved significant professional stature and influence; have a commendable, trailblazing body of work; and, who have used their experience and skills to help other women advance as leaders. Nominees should have a strong affiliation with the University of Rochester and a “lifetime” of significant achievements. The award is given annually to one woman.

Susan B. Anthony Emerging Leader Award
The Emerging Leader Award was established in 2018 by the Susan B. Anthony Center to recognize a female leader who is in the early stages of her career. Candidates have made significant contributions to and have strong engagement in the community, demonstrate strong leadership ability, and exhibit high potential for collaboration. Overall, the emerging leader is dedicated to making a positive impact in the University of Rochester and or Rochester-area community. Candidates should have an affiliation with the University of Rochester (staff, faculty, alumna, or community partners). The award is given annually to one woman.

Susan B. Anthony’s friends and family first endowed a scholarship in her honor in 1900. The initial $1000 fund was enough to generate $50 a year to provide a full scholarship to a deserving woman student. In the 1920s, Lucy Anthony, Anthony’s niece, made another donation to insure the fund would continue to meet the full cost of annual tuition and fees—$250.

Women students at the University have always felt a special bond to Anthony. They were honor guards

at her funeral in 1906 and, in 1946, the women’s Student Association voted to sponsor an annual Susan B. Anthony Day, scheduled to celebrate her February 15th birthday. A gala luncheon was held, awards were given and internationally renowned women were invited to speak to advance women’s rights.

The University of Rochester Women’s Club set up an endowment in 1979 to establish and sponsor this award. The group disbanded in 2019, but the endowment continues to be administered by UR Advancement. We are grateful for the many years of support we had from the members of the UR Women’s Club and are pleased to continue our relationship with Advancement in support of the award.

The Susan B. Anthony Scholarship is given to two women in their junior year who has demonstrated leadership, academic excellence and commitment to her fellow students and community. A student’s financial need is taken into account.

Fannie Bigelow was a friend of Susan B. Anthony’s and a fellow-worker in the causes of women’s suffrage, education and independence. She fought on behalf of women prisoners in the Monroe County jail, worked at the Baden Street Settlement House and championed the creation of a Children’s Court in New York State, now the Family Court. Bigelow was chair of the Women’s Education Fund, the committee that raised the $50,000 required by the University trustees to underwrite women’s admission to UR in 1900.

In 1947, Bigelow’s sisters, nephews and grandniece endowed a fund at the University in her memory. The fund afforded silver trays to be given to an alumna and woman undergraduate. Presented on Susan B. Anthony Day, the student award would go to “an undergraduate upperclassman chosen on the basis of her individuality, her ability to form and express fearlessly, with conviction and sound judgment, her opinions on vital topics. She shall demonstrate that she participates in extra-curricular activities because she sincerely believes in their value to the college community beyond their purely social worth.”

The silver trays became a single scholarship to an undergraduate at the recommendation of the Alumnae Traditions Committee in 1972.

Given in honor of a present day, former Rochesterian, the Jane R. Plitt Scholarship helps recognize and foster the progressive activism of Rochester’s women in history. Plitt, a Cornell Labor Relations graduate, has spent her life advocating for equal rights. In Rochester in addition to her professional achievements, she played a pivotal role in eliminating segregated men’s only grills, help wanted sex-segregated ads, and integrating the Rochester Jaycees and other service organizations which led to the acceptance of women as full members for the Rotary, Kiwanis, Lions clubs also. In 1973, she became the first national executive director of the National Organization for Women (NOW), a civil rights group advocating women’s rights. She co-founded the Rochester Women’s Network and re-familiarized, through her biographies, the pioneering achievements of the forgotten Martha Matilda Harper, who created modern retail franchising and put poor women into those franchises around the world, launching social entrepreneurship. Plitt continues to serve as a Visiting Scholar at the University of Rochester. Her book, Martha Matilda Harper: How One Woman Changed the Face of Modern Business, was first published by Syracuse University Press in 2000 and republished in paperback in 2019. Since 2000, two children’s books encouraging youth about Harper have been published, Martha’s Magical Hair and Martha the Hairpreneur.

Building on the Legacy of Jane Plitt’s advocacy for equal rights here in Rochester, Ms. Plitt’s sister and brother-in-law, Arlene and Richard Kossoff, endowed this scholarship in 1999 to be awarded to a woman undergraduate (full or part-time) who has demonstrated leadership on campus and/or in the Rochester community supporting equality for women. The recipient has demonstrated a long-term commitment for advocacy around women’s issues. She is creative, determined, brave, and effective in mobilizing others to work with her.

Sponsored by the University of Rochester Class of 1960 “City Girls”, inspired by Dean Ruth A. Merrill (dean of women 1954 – 1960), this award is presented to an undergraduate woman who has grown up in the Greater Rochester region. The recipient of this award is an ardent advocate for the Rochester region and participates in University and community activities that promote the overall well-being of the residents of Rochester. She seeks to address the disparity of opportunities which currently exist for many people, and to make a difference through her own civic commitment and that of other University students she engages in the work. Applicants must be in good academic (2.0 G.P.A. or higher)and disciplinary standing. This need- based award will be presented at the annual Susan B. Anthony Legacy Brunch. Applications will only be sent to students with financial need as defined by the Financial Aid Office.

Also known as the Sue S. Stewart Leadership and Community Service Award, this award, made annually, recognizes a senior woman undergraduate student whose life in the University has been distinguished by a commitment to justice, equality, and community service, as these relate to diversity and inclusion, particularly in the lives of girls and women; and whose activities reflect the spirit of these principles and dedication to these qualities as expressed and inspired by the life and career of former Senior Vice President and General Counsel of the University of Rochester, Sue Stewart.