In 2020, the passage of the 19th amendment to the Constitution, giving women the right to vote, will celebrate its 100th anniversary. The Center and community partners will be hosting a series of events to celebrate.

The resolution calling for woman suffrage had passed, after much debate, at the Seneca Falls Convention in 1848, convened by Elizabeth Cady Stanton and Lucretia Mott. In The Declaration of Sentiments, a document based upon the Declaration of Independence, the numerous demands of these early activists were elucidated.

The 1848 convention had challenged America to social revolution that would touch every aspect of life. Early women’s rights leaders believed suffrage to be the most effective means to change an unjust system.

The early 1900s saw a successful push for the vote through a coalition of suffragists, temperance groups, reform-minded politicians, and women’s social-welfare organizations.

Although Susan B. Anthony and Elizabeth Cady Stanton devoted 50 years to the woman’s suffrage movement, neither lived to see women gain the right to vote. But their work and that of many other suffragists contributed to the ultimate passage of the 19th amendment in 1920. 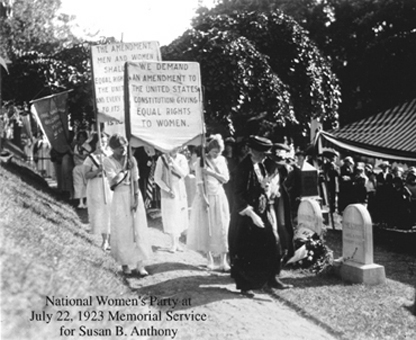