Blending the old and the new:

Blending the old and the new: the Sequoia Reed Quintet 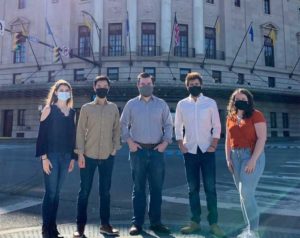 California’s giant redwoods inspired this group of Eastman School of Music students to name itself the Sequoia Reed Quintet. “Sequoias are the biggest trees in the world,” says Harrison Short ’22E, an applied music major and the group’s bassoonist. “They are also different from other trees, just like we are different from other quintets in that all of our instruments require a double or single reed. Our music is powerful, too—so like a big tree, we have a big sound.”

A typical, traditional woodwind quintet is comprised of a flute, oboe, clarinet, bassoon, and horn, but the reed quintet includes an oboe, clarinet, bassoon, bass clarinet, and saxophone. The instruments are combined in such a way to inspire a grittier sound than a wind quintet, and are more diverse in tone than a saxophone quartet. For instance, the rumbling sound of the bass clarinet and bassoon paired together creates striking intensity, while, for example, the ability of the oboe and clarinet to float delicately over the group speaks to this ensemble’s incredible versatility.

The Sequoia Reed Quintet is comprised of saxophonist Trevor Chu ’22E; bass clarinetist Julianna Darby ’21E (MM); oboist Gwen Goodman ’22E; Michael Miller ’22E; and Short. “Playing in this chamber group of only five members requires a strong artistic and interpersonal connection,” says Goodman. “For us, this is where the magic happens.”

Sequoia Reed Quintet’s original members all met as first-year students. That’s when the school places students in required chamber ensembles. A few of the group’s founding members quickly connected, excited by the potential of the kind of music they wanted to make together. They found a faculty coach, Professor Chien-Kwan Lin—who is also the founding director of the Eastman Saxophone Project—and have since recruited other members.

“This group is so self-motivated and eager to learn,” says Lin. “They’ve been giving their all since day one and never backed off from the tedious, nitty-gritty work involved in perfecting their music—this makes working with them truly rewarding.” 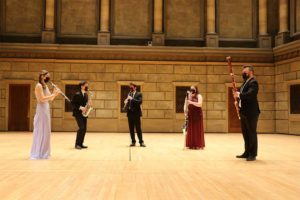 Jamal Rossi, the Joan and Martin Messinger Dean of the Eastman School of Music, surprised Sequoia when he invited them to perform at the school’s centennial celebration and campaign kickoff event on Thursday, April 29.

The quintet played two pieces that evening. The first was “Praeludium,” a movement from the Holberg Suite, which was originally arranged for the piano. Short notes that a reed quintet from The Netherlands called Calefax has taken a lead role arranging classical pieces for other reed quintets. They’ve published those arrangements, too, which gives Sequoia and the small community of reed quintets around the world access to a variety of great music arranged specifically for their instruments.

The quintet’s second piece was a fast-paced version of “Cherry,” a movement from Splinter, written by Marc Mellits ’88E. Each of the eight movements from Mellits’ work is named after a tree, which makes this an apt piece for Sequoia to perform. “‘Cherry’ is really fun to play,” adds Short. “It’s imbued with a driving rhythm and pop music energy that most audiences really like.”

Goodman enjoys the group’s passion for interpreting any genre of music and doing so at the highest level. “Whether an arrangement of a romantic orchestral work like Grieg’s Holberg Suite, or a piece specifically written for this instrumentation such as Mellits’ Splinter, we love to dig in and really fine tune every detail,” she says.

Innovating during a tough year

Since the pandemic hit, Sequoia has not performed publicly. Like all Eastman students, they were sent home last year and had to find other ways to hone their craft, remotely and safely. This newfound way of working together prompted them to reach out to a Swiss reed quintet called Reeds in Motion with whom they collaborated on Dvorak’s “Serenade for Winds,” which Short arranged:

“By collaborating on this piece, we showed how music can connect us all, even with an ocean between us,” adds Short. In addition and in lieu of public performances, Sequoia has entered several competitions this year and they also welcomed a new bass clarinetist.

Although they do rehearse, playing together is much different than it was pre-COVID. For instance, they book 90-minute rehearsals in which they actually play together for just 60 minutes. They play 30 minutes on, 30 minutes off, then 30 minutes on again, allowing them to take a required break to purify the air for health and safety reasons. They also use a bell cover on the ends of their instruments as an additional safety precautions.

“The Sequoia Reed Quintet sets high expectations for itself,” adds Lin. “This takes a tremendous amount of dedication and individual work—the way these young musicians make sacrifices in order to lift each other up is really inspiring for their peers.”

Both young and old

The quintet’s members appreciate that Eastman is steeped in tradition yet embraces new ideas and approaches to music. Sequoia is committed to both, too, and is focused on keeping history’s musical foundation alive and putting a modern spin on classical music.

So, far it’s working well for the group. The Sequoia Reed Quintet also benefits from each member’s personal—and quite varied—tastes in music. Some bring their passion for Mozart, Brahms, and Beethoven to the table, while others offer insights gained from listening to experimental music and independent collaborations.

“Reed quintets like ours are both young and old,” says Short. “We thrive on both tradition and innovation, just like Eastman.”

Learn more about the Eastman School of Music’s Centennial Campaign and help celebrate a century of artistry, scholarship, leadership, and community. Get involved, too—compose a fanfare, attend an event, tell us your story, and follow Eastman on social media.