John Green, a PhD candidate in musicology at the Eastman School of Music, is fascinated by history. As part of his graduate work, Green gained experience exploring extensive library archives during his research of John Cage, a 20th century American composer. He sifted through Cage’s correspondence and musical scores housed in archives at Northwestern University and the New York Public Library. 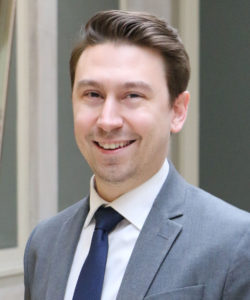 When Green learned about the opportunity to help archive Joseph C. Wilson’s papers, he jumped on it. His primary responsibility was to develop the finding aid to help scholars and researchers search the broad expanse of Wilson’s papers, all of which were delivered to the River Campus Libraries in 60 large, record cartons. Each box was filled with the University benefactor’s original file folders, notebooks from his youth, and a variety of other materials.

Before embarking on this project, Green, who is from Syracuse, knew little about Wilson, other than knowing he was the namesake of Wilson Boulevard and Wilson Commons. Thoughtfully perusing his papers led Green to understand the impact that Wilson had on Xerox, the University, and the community at large.

“Everything I’ve seen and read from him and about him makes it clear that he was a man full of integrity, someone who could rally and uplift people. He was someone who had vision and the rare ability to inspire people to want to do more, be more, and to really make a difference,” says Green. “We can learn so much about business and leadership from him—which is a great part of the appeal of his papers.”

Green learned much about Rochester’s local history from Wilson, including insight into the race riots of 1964. He also gained perspective on Wilson’s business prowess, by reading ledgers rich with information along with details about how he influenced the University’s investment strategy. Wilson’s recommendations dramatically affected the growth of the endowment and helped set the future for the institution.

Green also gained insight into Wilson, the man. “People recount him as an extremely affable leader who understood the burdens and responsibility of leadership and who allowed for the full autonomy of his staff and the people around him,” he says. “Everything in these papers illustrates a spotless personal and professional character.”

Read “Joseph C. Wilson’s Papers Now Accessible Online,” which underscores the importance of this gift to the University of Rochester.