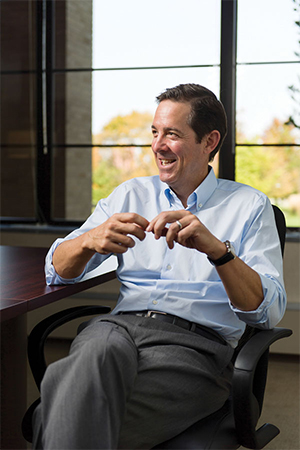 ONGOING MISSION: The fundraising campaign that concluded in June was “a means, not an end. It was always about the mission, not the money,” says Tom Farrell ’88, ’90W (MS), senior vice president for University advancement. (Photo: Adam Fenster)

A fundraising campaign is about forging connections as much as it is about raising money.
Interview by Kathleen McGarvey

This interview originally appeared in the November-December 2016 issue of Rochester Review.

When The Meliora Challenge comprehensive campaign ended in June, five years after its public launch, the University had raised more than $1.373 billion, exceeding the $1.2 billion goal.

More than 200,000 donors and 7,300 volunteers took part. The campaign has brought more than 100 new endowed professorships, more than 400 new scholarships and fellowships, and more than $129 million for new and improved facilities and infrastructure.

The Medical Center led a nearly $700 million campaign for The Meliora Challenge, a major portion of which provided for the new Golisano Children’s Hospital, an eight-story space dedicated to healing the 74,000 children across the region who rely on the University for care each year.

Tom Farrell ’88, ’90W (MS), senior vice president for University advancement, says that he’s grateful for the outpouring of generosity—and that the funds the campaign raised are crucial for the University to carry out its many functions. But he calls the role that the campaign has played in rallying people to reconnect with Rochester and its mission even more essential. Those relationships are the real key to making the University “ever better,” he says.

What’s the value of campaigns?

They’re very effective tools for forming a vision and a set of priorities for an institution’s future. They bring the people who care about a place together around objectives and ideas that they connect with and want to participate in.

So campaigns are also an exercise in clarification?

Absolutely. One of the great things that came out of this campaign is our memorable mission statement: Learn, Discover, Heal, Create—and Make the World Ever Better. It’s a pretty remarkable distillation of what great American research universities like Rochester are all about.

What does it mean to “support” a university? Is that fundamentally about money?

No, it’s not at all. We want to build a much stronger culture of ownership around the future of the University. And that ownership might be giving a gift, but it might also be advocacy, or volunteering, or giving career support to our students, or providing feedback, or participating in an event. And it involves all our stakeholders—not just alumni, but also students, faculty, staff, and friends.

Here’s what I mean by ownership: if I look up at the ceiling in my house and I see a leak, I’ll be agitated and concerned. I’ll call a contractor. I’ll get it fixed right away. But if I’m in a hotel room and I see a leak in the ceiling, I’ll think, wow, they’ve got a leak in their ceiling. I might tell the manager, but probably wouldn’t.

We’re trying to develop the same culture of ownership for people who are connected to the University, and to do it in a way that’s based in our mission and that will help support our mission as we go forward.

What encourages that sense of connection for people?

Communication. Expectation setting. Shared values. I think people significantly misinterpret any university’s interest in contributions, in this sense: are we interested in people participating and continuing to be active members of this community? Yes, we are. Are we interested in people—alumni and others—making large donations to support our mission, donations without which we can’t carry out the mission? Yes, we are. Should people who can’t give $1,000 or $10,000 or $1 million or $10 million feel like their $50 gift doesn’t mean anything? Absolutely not.

Giving a $50 gift to your university, in my view, is saying, yes, I still believe. I’m making a vote that indicates that I’m still connected to you. The University made a difference in my life, and I’m willing to make a tangible statement in recognition of that by giving you $50, or $10. It’s not about the money. It’s about raising your hand and saying, I still believe in the University and I’m willing to participate in this way.

It’s not the only way of participating. We’re hoping that people will be advocates, go to events, read Rochester Review, stay in touch with their friends, give information, and say good things about the U of R when they’re asked about it.

The opposite of love isn’t hate—it’s indifference. We don’t want an indifferent community. We want a connected community, and we want to make the connections we have already even stronger.

Has that been happening?

I think it has. We hit all of our major goals. We raised a much greater amount of money than we had previously. We were able to develop our volunteer culture. We were able to revamp our communications and regional and geographic event activity. We were able to connect with our faculty and staff in ways that we never had before.

A lot of this has to be considered in the context of Joel Seligman’s presidency. It’s important for people to remember that the campaign has coincided with Joel’s presidency, and with a dramatic growth and improvement in so many different aspects of the University’s activities.

You can see the effect of that vision if you look at the physical infrastructure, at the quality of our faculty and students, at the improvement in our financial position, at the growth of our endowment, and at the growth in many program areas—including, very importantly, the Medical Center.

Everyone came together around a mission-based vision to make the place better. And through the campaign, we sought all the revenue sources we could to drive that. We persevered through the recession. And it came together.

How far does the money raised go toward meeting the University’s expenses?

It’s a heck of a lot of money. But it’s important to compare those dollars to the size of the institution—29,000 total employees, a $3.2 billion total budget, annual outlays of over $100 million a year in financial aid to undergraduates, and $900 million-plus in capital project improvements over the same time period. If you look at total institutional expenditures over the life of the campaign, it’s over $32 billion—and the campaign raised $1.37 billion.

We’ve benefited from tremendous generosity. Philanthropy is a defining aspect of American higher education, but philanthropy and the endowment, on an annual basis, generate less than 10 percent of our revenues. If you look at our peer institutions, it would be more like a third. So we still have a ways to go. And if you look at the fact that Stanford University last year raised over $1.2 billion dollars in cash in one year, you start to recognize that, from a competitive point of view, we’re just beginning.

We’re spending the year going around the country and the globe to thank people for what they’ve done. We owe special thanks to our Rochester community. The Greater Rochester area donated 41 percent of the campaign total. That’s truly significant and it speaks, in part, to the vital role of our Medical Center in this community.

At the same time, we’re also grateful to the people around the globe who’ve participated. The University is important nationally and internationally, and the gifts that made up 59 percent of our campaign total are a demonstration of that. We want to protect against the campaign being viewed as episodic. A campaign is a means, not an end. It was always about the mission, not the money.

Even as we’re expressing our gratitude, we’re also continuing to try to raise funds to support the mission and the priorities of the University. That’s how American higher education works. There’s a partnership that finances American higher education, and it includes many different resource streams—including students and families, the endowment and institutional support, federal research grants and other funding, and limited but critically important support from the state. And it includes philanthropy.

But philanthropy can’t happen outside of a genuine commitment to engaging, over long periods of time, with our external communities. Without that commitment, it just doesn’t work. And the U of R in the past wasn’t always deeply committed to seeking those connections. That’s an idea that has been banished from this institution’s mind-set.

Joel’s been the chief communicator of that message, but it’s also something that everybody here is committed to—not just the Advancement office, but also the deans, the provost, the faculty, the board, our volunteer leaders, our donors, and our supporters. We hope all our alumni, parents, and friends will feel that, too.