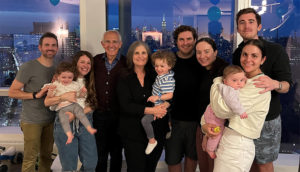 Kenneth Ouriel ’77, ’86M (Res), ’87M (Flw) and his wife, Joy Bracker Ouriel, have committed $1.5 million to establish the Kenneth and Joy Ouriel Family Professorship within the University of Rochester Medical Center’s Division of Vascular Surgery. The couple’s endowed gift will advance excellence within the vascular surgery program and provide resources to honor, recruit, and retain world-class faculty and staff leaders who can identify, understand, and treat some of the most complex health problems challenging society today.

“We are incredibly grateful to Ken and Joy for their vision and partnership,” says Mark Taubman, dean and CEO, University of Rochester Medical Center. “Professorships like this provide critical resources that support top tier surgeons, researchers, and educators. Our patients, students, and the overall field of vascular surgery will forever benefit from the tremendous generosity of the Ouriels.”

“The University of Rochester made my career possible,” says Ken. “I attended college here and then returned as a surgical resident and fellow where I was fortunate to work with the legendary Dr. Seymour Schwartz, Dr. James DeWeese, and others who helped set the course for my life. This professorship is a way for our family to show our appreciation and give back to the University and to vascular surgery specifically. We are eternally grateful for the operative training and academic foundation provided to me and other surgical trainees at the University. Any success that I have achieved in my career was possible as a result of my experiences at URMC.”

“This professorship illustrates the Ouriels’ dedication to surgical excellence and their commitment to improving patient outcomes through clinical research,” adds David Linehan, the Seymour I. Schwartz Professor and chair of the Department of Surgery at the University’s School of Medicine and Dentistry. “Ken has a long track record of improving patients’ lives, as evidenced by his distinguished career as a surgeon, administrative leader, visionary researcher, and entrepreneur. The Division of Vascular Surgery has a long-standing history and legacy of training tomorrow’s academic leaders, and the Ouriel family’s gift will propel the translational research and innovation to the next level.”

Ken remained at the URMC as a faculty member in surgery for 11 years, when, in 1998, he joined the Cleveland Clinic as its chief of vascular surgery. Later, he became its chief of surgery, during which time he oversaw a staff of 340 surgeons, making it the largest surgical department in the world at the time. In 2001, while at the Cleveland Clinic, Ken treated former presidential candidate Bob Dole for an aortic aneurysm. In 2007, he led a Cleveland Clinic team in Abu Dhabi where they helped establish world-class care at the Sheik Khalifa Medical Center. While in Cleveland, Joy worked at the Mandel Jewish Community Center, helping to design and execute programs to provide scholarships for children who would otherwise be unable to attend summer camp and preschool at the JCC.

In 2008, Ken served as senior vice president and chief of international operations at New York-Presbyterian Hospital. At the same time, he earned an MBA from Columbia University and the London Business School. In 2010, Ken founded Syntactx, a medical device development solution company.

“Over the years, Syntactx grew and that prompted Joy and our adult children, David (who earned his MBA from the Simon Business School in 2008), Richard, Elizabeth, and Elizabeth’s husband, James to join the company,” adds Ken. “The whole family has worked hard to bring innovative medical technologies to market, with the goal of improving patients’ lives around the world.” In 2021, NAMSA, a medical device-focused clinical research organization, acquired Syntactx. Today, Ken serves as its chief medical officer.

Ken is also the author of five textbooks and more than 350 scientific articles. He is a frequent presenter at national and international conferences, too. Ken and Joy reside in New York City and Canandaigua, N.Y.

“Two themes have run through our lives: Rochester, the city where we were born and raised and where our children grew up, and doing something that impacts others in positive ways,”  says Joy. “This professorship is our way to pay it forward, to create possibilities for those with the same mindset as us—those whose mission is to make life better and healthier for others. Our family is committed to this mission, too. This gift helps create a legacy which makes us all very happy.”

The Medical Center’s Division of Vascular Surgery provides comprehensive vascular care to patients with a wide range of heart and blood flow issues. Its surgeons specialize in procedures to diagnosis and treat aneurysms, blocked arteries, blood clots, varicose veins, as well as compromised blood flow to the brain, intestines, and kidneys.