The 30,000-square-foot Sloan Center will open on the River Campus in August, with full functionality by the end of the fall semester 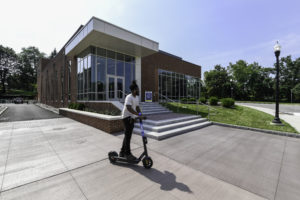 The 30,000-square-foot Sloan Performing Arts Center is slated for a soft opening at the end of August, adding a much-anticipated new building to the University of Rochester’s River Campus just in time for the fall semester. The building will be fully functional by the end of the calendar year.

Dedicated to theater, dance, and music, the three-story Sloan Center will house a 200-seat black box theater, an atrium, a café, a green room, a scene shop, a costume shop, a box office, dressing rooms, a conditioning room, and more. Each space will encourage creative expression, skill building, and community activity.

“This is the first building ever designed to serve the performing arts on the River Campus,” says Gloria Culver, dean of the School of Arts & Sciences. “We’ve needed this additional space on campus for some time now, and because of the vision, dedication, and leadership of the Sloans and others, we can now offer a beautiful, thoughtfully designed, contemporary building that will nurture our students’ creative pursuits.”

Rochester students pursue degrees in theater, dance, and music. They participate in more than 40 performing arts-based clubs on the River Campus, too, including 20 cocurricular dance groups. They engage in the International Theatre Program, too, which typically offers four productions annually and two smaller works. The College also offers many musical performances and more than 100 music classes to undergraduates.

“Our students embrace theater, dance, and music, just as they do physics, philosophy, and anthropology, and so many other areas of study,” adds Culver. “That’s part of the magic here at Rochester—our students can pursue their academic and cocurricular passions and be part of an environment that supports exploration, growth, and imagination. The Sloan Center will be a great addition to campus—a center for joy, inspiration, and connection.”

Tom Sloan, a retired business executive and lifelong arts patron says, “Everything that will happen within these walls—on stage, behind the scenes, and in the hearts and minds of audience members—will be a catalyst for creativity, community, and collaboration. We are excited that this new building will help enrich students’ lives and their overall experience on the River Campus.”

“Theater, music, and dance provide distinct ways for people to come together—they offer inspiration, and they help us feel alive,” adds Linda Sloan, who holds an MFA degree in drama and has dedicated much of her life to the arts. “This new building provides an additional space on campus where more of this can happen—we are honored to be a part of it.”

Located next to Todd Union and near Strong Auditorium, the three buildings will form a performing arts corridor on the River Campus. Each building is designed to support an array of creative activities, including classes, rehearsals, set and costume production, and performances.

See the Sloan Performing Arts Center fact sheet for more details about the building. Also, get a behind-the-scenes look at the making of the 60-foot-long mosaic by artist Jay Yan.