The show goes on

The show goes on

Lusette (Andy) Smith ’72 tells about her path from stage manager to computer programmer to software engineer and technology consultant. 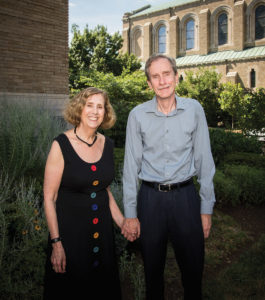 CAREER CHANGER: Technology consultant Lucette (Andy) Smith—pictured with her husband, Ed, whom she met at Rochester—is a former stage manager of on- and off-Broadway productions. (Photo: Stephen Voss for Rochester Review)

Lusette (Andy) Smith ’72 first stepped onto a stage when she was 10 years old. Alice in Wonderland was the play and she was given the part of the Two of Hearts. “I got it simply because I was the shortest,” she says, with a chuckle.

That modest role marked the beginning of a lifelong interest in theater. Over the years, however, she found she was well suited—and perhaps better suited—to working behind the scenes. “I quickly moved from acting to stage managing,” she says. “I think it’s because whenever I auditioned for a show, I was often ‘invited’ to work backstage.”

She began a career that took her to professional stints on, off, and off off Broadway. Then, decades later, she transitioned to a career in the computer technology industry.

There are similarities to both fields, which require strong problem-solving skills and teamwork.

“Regardless of whether it’s an actual theater production or a computer program, the show always has to go on,” says Smith, who retired from BEA Systems/Oracle Systems in 2014.

Smith moves into Theta Delta House for the summer—a fraternity house with room to spare for her and a few other leaders of the University’s summer theater program, then in its third year.

Eight students involved in summer theater—including Smith and her future husband, Ed Smith ’72, whom she met in an introductory psychology course their first year—rent a house on South Plymouth Avenue.

“The University gave each of us a stipend of about $50 per week. That money went fast. So, we would go to the store, buy a couple of loaves of day-old bread, peanut butter and jelly, and bologna and cheese. Every morning, we’d slap on the peanut butter, spread the jelly on the other side, and then off we’d go.”

Summer theater programs back then were eclectic. “We did everything from Gilbert and Sullivan to Broadway shows to obscure contemporary productions to Shakespeare.”

After graduating with a bachelor’s degree in English, Andy heads to Syracuse University, where she enrolls in a master’s program in theater stage management.

She leaves after a semester. “Academia was no longer the place for me.”

Andy and Ed move to New York City. “Times Square was just beginning to turn over then. A production house called Playwrights’ Horizons—which later became one of the off-off-Broadway theaters with the best reputation—took over an old burlesque house. I ended up organizing its prop shop and then became one of its stage managers.”

Andy and Ed get married.

Andy serves as a production assistant for the New York Shakespeare Festival, now known as the Public Theatre.

As she works her way up to production stage manager on and off Broadway, she collaborates with performers who later make it big, including Meryl Streep, Robert Guillaume, Raul Julia, William Hurt, Sam Waterston, Michael Moriarty, and Estelle Parsons.

While Andy is between stage management jobs, a friend encourages her to take a computer aptitude test at New York University. She does it on a whim.

“I didn’t have anything going on that day, so I decided to take the test. I remember there being a lot of puzzles on the test and that I was done much faster than other people in the room.”

NYU accepts Andy into its 12-week-long computer programming certification program. “The computer industry was in its infancy. There weren’t any computer engineering degrees back then, so it was a lot of on-the-job training.”

Andy lands a job with Thomson McKinnon Securities as a computer programmer. “I thought I got that first computer job because of the certification program, but years later I found out it was really because of my Rochester degree.

“The supervisor and hiring manager were both graduates of the US Naval Academy at Annapolis. During their required summer cruises, they had come into contact with Naval ROTC midshipmen from across the United States. They both felt that U of R students were the only ones who could hold a candle to their Annapolis colleagues.”

She never did remind them that she was an English major, not an engineer like most of the University’s ROTC participants.

The Smiths move to Boston. For the next 10 years, Andy works at Computer Associates International, PowerSoft, and Sybase in a variety of positions spanning computer programming, computer engineering, system analysis, and customer training.

The Smiths move to the Washington, D.C., area, where Andy holds leadership positions as a software engineer and instructor at BEA Systems/Oracle Systems. Highlights include managing projects for the Department of the Navy and working with clients such as Boeing, the Census Bureau, and the Internal Revenue Service.

The Smiths, having continued their mutual love of theater throughout their careers, start hosting young artists affiliated with Wolf Trap National Park for the Performing Arts, just a few miles down the road from their home in the D.C. suburbs.

“For 15 years, we’d take in an opera singer, stage manager, or vocal coach. It was a great way to get to know a different generation and get the inside scoop on the opera world. It’s been quite rewarding to follow these artists over the years and see their careers flourish at places such as the Metropolitan Opera, the Vienna Opera, and elsewhere.”

Now retired, the Smiths move to the heart of D.C. to be closer to the theater, symphony, opera, and ballet.

This story originally appeared in the summer 2018 issue of Rochester Review.