A Mind for Sound

A Mind for Sound

Kedar Shashidhar ’15, ’16 (KEY), one of Rochester’s first audio and music engineering graduates, is on the forefront of three-dimensional sound.

As a high school student in Corning, New York, Kedar Shashidhar ’15, ’16 (KEY) was accepted into the Eastman School of Music for classical saxophone performance. His parents told him he could attend on one condition: that he coupled it with a degree in engineering.

Shashidhar complied, and was admitted as well into the College, where at a required orientation program for students who planned to study engineering, he learned about a soon-to-be-offered major in audio and music engineering.

Shashidhar knew this was the program for him. He withdrew from Eastman and became one of the very first audio and music engineering majors at Rochester.

Today, in addition to designing audio-only games at his studio, Blackout VR, Shashidhar puts his skills to work at OSSIC Studios, a Kickstarter-funded company in San Diego that’s developing three-dimensional audio headphones. As the company’s associate creative director, he has a range of responsibilities, from product and software tool development, to working directly with designers, musicians, and game developers, to building virtual reality experiences to showcase 3-D audio’s potential. 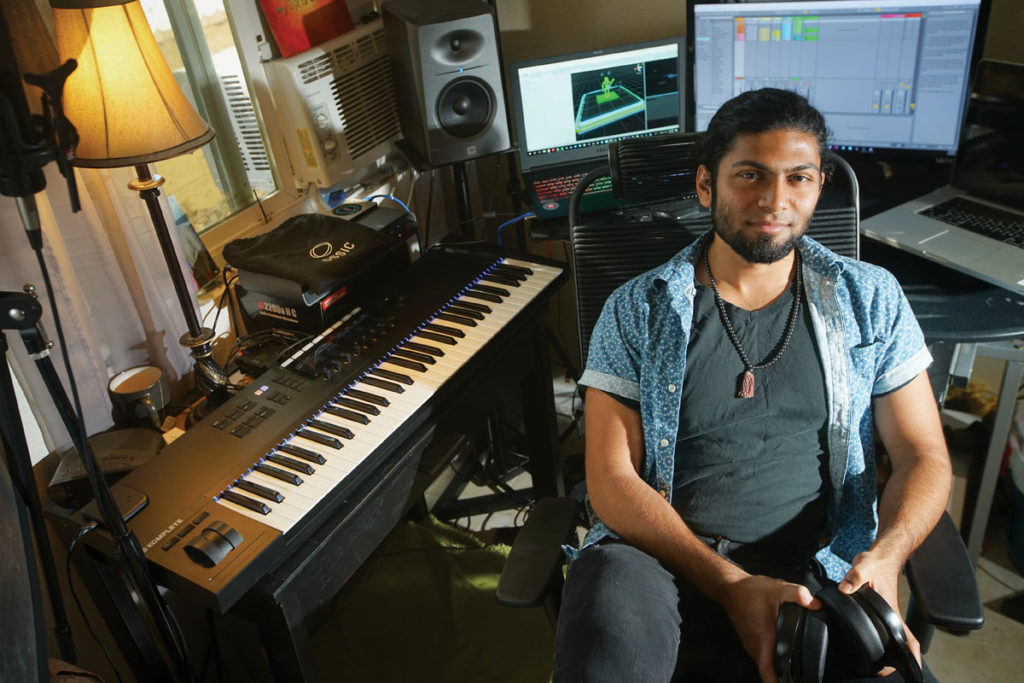 MULTIDIMENSIONAL: As both a musician and an engineer, Shashidhar is steeped in sound. When he’s not working to develop state-of-the-art 3-D headphones and audio-only games, the one-time classical saxophone student—and pioneering audio and music engineering major—sings in a San Diego barbershop quartet. (Photo: Sandy Huffaker/AP Images for Rochester Review)

What is three-dimensional audio?

Three-dimensional, or 3-D, audio is about experiencing sound as we hear it in the world. Think about it: sound exists in a particular location; it has directionality. In that way, 3-D audio allows us to experience truly immersive worlds while sitting at the movies, watching TV at home, playing a video game on a gaming console, phone, or computer, or listening to music through any type of device. Even while creating music or composing musical scores.

It’s already creeping into our daily lives. For instance, Dolby is using it in music now. Games are also featuring it. YouTube and Facebook support 3-D audio now when watching 360 videos, too, but there’s a ways to go on the technology. Although you can plug in a normal pair of headphones and experience spatial audio from 360-video content that’s already there, you might experience spatial blur. This happens when you’re trying to pinpoint a sound source, but its location is unclear. It makes it difficult to tell if a sound is coming from in front or behind your head, or directly above or below it. These problems arise because the spatial audio is created using a model of the average human head and ears. In actuality, our individual anatomical differences are key to our ability to tell clearly where a sound is coming from.

Besides entertainment, what are potential applications for 3-D audio?

It’s certainly of particular interest to a number of industries, such as aerospace or military communication. Imagine, for example, that you’re a pilot. Sounds come from many directions inside the cockpit. When sounds are spread out so they aren’t coming from one source, our auditory comprehension improves, which can improve pilot reaction times.

Or, say you are on a Skype call with 12 other people from around the country. You hear voices on top of each other and it’s nearly impossible to distinguish them. With 3-D audio, you can distinguish among voices that are coming from in front of you, behind you, and to the left or right of you.

What special considerations are involved in developing 3-D headphones?

The OSSIC X headphones we’re developing are full of technology that “understands” the distinctive aspects of each listener’s anatomy—aspects like head shape and width—that help us figure out where sounds are coming from. An individual’s ear for example, is as unique as a fingerprint.

Our headphones also feature head-tracking technology. This helps users confirm where a sound is coming from. It’s like when we rotate our heads to get visual confirmation of where a sound is coming from. When we hear a car honking, for example, we turn our heads to locate the car. This head-tracking, paired with the headphone’s ear calibration, allows us to create accurate 3-D sound that actually lives outside of our heads. It’s the evolution of both the 3-D audio technology you might find on YouTube and the surround sound technology you might find in your movies.

This story originally appeared in the January–February 2018 issue of Rochester Review.