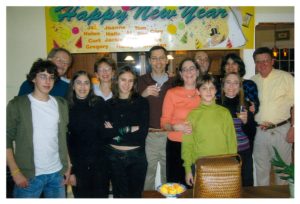 When Cory Amron ’74 and Jackie Miller ’74 both ended up at the University of Rochester from their hometown of Queens, the friends since third grade decided to begin their collegiate lives by branching out and rooming separately. Jackie went on to secure her first-year roommate Debbie Gephart Worbis ’74, and by their third year on campus, the three friends decided to share a suite with Janice Rowe Blinder ’75, Joanne Harap Kovener ’74, and Helen O’Connell-Short ’74.

For more than 45 years, these former suitemates have been getting together annually to stay connected and celebrate their friendship.

Hailing from New Jersey to Ohio and Kalamazoo and beyond, each of the six women brought unique perspectives, majors, and interests to the group. “It was such a positive experience,” says Helen O’Connell-Short ’74. “We respected and supported each other as we celebrated what we had in common and learned from our differences.”

Even though they are now dispersed across the country, the annual reunions have been going strong since 1973. Cory Amron ’74 proudly credits Joanne with being the glue that has held the friendship together, especially early on when families, jobs, and “life” always attempted to get in the way–a common theme for anyone trying to maintain friendships.

Originally held every New Year’s Eve, the group has added summer gatherings to their collective calendar, often at Smith Mountain Lake in Virginia. The ladies use their time together to catch up, especially about their children, who are now older than the suitemates were when they first met.

Cory counts herself as lucky to have these connections. As she puts it,

“It’s amazing to be able to share life’s experiences with people who have known you for so long.”

Those experiences also happen to include Rochester love stories. Janice is married to Henry Blinder ’73, and Helen married Al Short ’73 shortly after graduation in the Interfaith Chapel. The Shorts have even displayed their die-hard alma mater pride with custom “Meliora” vanity license plates.

As the suitemates reminisce about their time on campus, as they often do when together, they remember $0.50 movies offered three times a week, going out for pizza, and battling the unfriendly elements. The suitemates could always count on each other, and the warmth of their camaraderie helped make Rochester a bit cozier than the temperature outside.

While they no longer live under the same roof, or even in the same state, the University has had a lasting impact as the starting point for two marriages, countless memories, and special bonds between six strong women that have spanned more than four decades. “It’s difficult to express the significance of our bond,” says Jackie Miller ’74. Helen adds, “The fact that we still get together every year is a testament to how we learned to know and care about each other, despite our different backgrounds.”