A Lifetime as a Leader

A Lifetime as a Leader 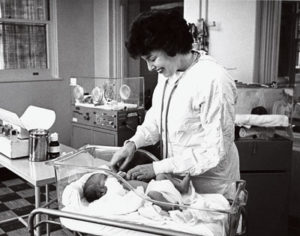 Ruth Lawrence ’49M (MD) is a pediatrician, clinical toxicologist, neonatologist, and mother of nine. At 95 years old, she can be still found in her Medical Center office three days a week, clad in one of her many white coats and conducting research, advising staff, or preparing for her next classroom lecture.

Lawrence has had a formidable career, shattering her share of glass ceilings along the way. She holds the titles of Alumna Professor of Pediatrics and Obstetrics/Gynecology and the Northumberland Trust Professorship in Pediatrics. She was also the medical director of the Ruth A. Lawrence Poison and Drug Information Center, which she founded in 1958, the second poison center in the country and the first to answer calls from the public.

An international authority on breastfeeding, she serves as the director of the Breastfeeding and Human Lactation Study Center, which she founded in 1985. Additionally, she helped create Rochester’s first Neonatal and Pediatric Intensive Care Units. Originally published in 1980, her textbook, Breastfeeding: A Guide for the Medical Profession, has become the gold-standard reference for the scientific understanding of human lactation and clinical breastfeeding practices. She and her son Rob ’73, also a pediatrician, are working on the ninth edition of the book.

I grew up during the Depression, one of four kids. My father died when we were young, and my mother raised us by herself. We lived in Westchester County, in a rented house with a thatched roof. I didn’t go to school until I was seven years old. That’s about the time my mom got a job as a tennis coach at Scarborough Prep, a private high school in town. I ended up going there for my junior and seniors years, on scholarship.

I was offered scholarships to Radcliffe and Smith. The dean at Scarborough wanted me to go to Antioch College in Ohio, though. No one from Scarborough had gone there yet. Horace Mann, an education reformer, founded the college, which was among the first to welcome women.

Every semester, you took classes and you got a job. At Chrysler in Detroit, I did secret government research on the oils and greases used in our planes that were bombing Berlin. Later, I worked for Ciba, a pharmaceutical house in Summit, New Jersey, where I researched medications and conducted some of the earliest experiments on antihistamines.

My acceptance to medical school

During my final semester at Antioch, I applied to 10 medical schools. Many didn’t want women back then. Rochester was the first one to respond. I got a letter that said, “You must come for an interview. Time and money should be no object.” It was handwritten by George Whipple, the first dean of the medical school. You couldn’t get into Rochester unless Dean Whipple said so.

My fiancé, Bob ’49M (MD)—whom I’d met at medical school— and I were waiting to hear where our residency applications had been accepted. I had several offers, but Bob’s paperwork got all messed up. One day, while we were still to see what our opportunities were, Dean Whipple marched me into his office. He said that the head of Yale University Hospital in New Haven was on the phone and wanted to know why I hadn’t responded to its offer. The man from Yale said to me, very pointedly, “We have given you a job and we’d like your answer now.” Of course, I said yes. Bob ended up staying in Rochester for his residency.

Bob and I had plans to marry on July 8, 1950. We even had our wedding bands engraved with that date. But then the Army called and ordered him to California for training on July 5. So, we had to change everything very quickly and got married on July 4 instead.

Following the wedding, I went back to my residency at Yale, and Bob went to Korea. With so many men being shipped off to war, they offered me a good job. I was pregnant at the time, and I would have my first child by myself in New Haven. In those days, being married and having a baby and a job was an entirely new concept.

I ended up working in New Haven in the rooming-in unit for mothers and their newborns. This was where I learned all about taking care of babies. I breastfed my baby, Rob, too, and I realized how important it was. That’s when I started helping other mothers.

Around that time, Dr. Bill Bradford, the chair of pediatrics and an associate dean, asked me to run the well-baby and the preemie nursery at the hospital. It was unusual for a woman to have a job like this, but I had the experience. We took care of a lot of sick babies back then. One time, with the help of my husband who was an anesthesiologist, we saved a baby’s life by putting him on a ventilator. It was the first time this was ever done.

My first and second children are about five years apart and the rest are separated by about 18 months to two years. They are Rob ’73, Barbara ’81M (MD), Tim, Kathleen, David, Mary Alice, Joan, John, and Stephen. They’ve pursued lives in medicine, business, academics, and more. We lost our number eight child, John, to cancer when he was in his 40s. He was a brilliant writer.

Sometimes people ask me how I did it, raising nine kids. I breastfed them all, too. I tell them “If you’re going to cook dinner, you might as well cook a lot of it.”

As I work on the ninth edition of Breastfeeding: A Guide for the Medical Profession, my dining room table is chock full of research and stacks of papers. I can’t even use the table anymore and so I eat in the kitchen.

If I’m not writing or at the office, I do like to garden, but it’s not as easy as it used to be. I have a little cart that has big wheels on it. You can just ride on it and pull up the weeds.

Marrying my husband. We were married 59 years before he passed away. I hit the jackpot there—no question about it.