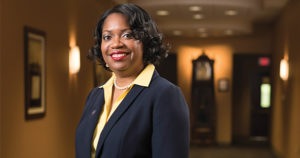 Karen Chance Mercurius
ENGAGING PEOPLE: When alumni and friends feel engaged, “the University benefits, as do the people, programs, and research that make up this stellar institution,” says Chance Mercurius.

Defining moments happened early in the life of Karen Chance Mercurius. She grew up in Brooklyn, New York, the child of parents who immigrated to the US from Grenada in the 1970s.

As a teenager, she witnessed the 1991 Crown Heights riot. As a young woman, she attended her mother’s naturalization ceremony.

Such experiences helped open her eyes to culture, difference, and community. She is bringing a keen focus on inclusivity and belonging to her new role at the University, where she is the associate vice president for Alumni and Constituent Relations. Joining Rochester in March, she has spent the last few months on an extensive listening tour with alumni, parents, community members, and friends, as well as with faculty, students, and staff.

It’s a natural step for Chance Mercurius, who has been steeped in higher education for nearly 20 years. She received both a bachelor of arts in international relations and Africana studies and a master of science in organizational dynamics from the University of Pennsylvania. From Fielding Graduate University in Santa Barbara, California, she earned a master of arts in human development and a doctoral degree in organizational development and change. Her most recent position was director of alumni relations at Harvard Law School.

A dedicated alumna and volunteer, Chance Mercurius has served for almost two decades as the gift cochair at the Penn Fund for her class reunion. She is also a member of the Trustees Council for Penn Women, the James Brister Society at the University of Pennsylvania, and the CASE Minority Advancement Institute.

Aligning with Ever Better

This is an amazing institution. When I was doing my research on the University, I learned about its mission and focus on Meliora. That concept of “ever better” aligns with me personally and professionally.

I was also drawn to the vision of the Advancement office here. Tom Farrell ’88, ’90W (MS), his leadership team, and the Advancement staff overall have developed and are executing the Rochester Model, which focuses on building a culture of philanthropy and engagement to advance the great work of the University.

Alumni and constituent engagement go hand in hand in this regard. When all of our constituents feel engaged, the University benefits, as do the people, programs, and research that make up this stellar institution. To me, this is noble work.

I’m particularly grateful for my Caribbean-American heritage and the strong values my parents instilled in me. They underscored the importance of education early on. I attended, and thrived, in New York City public schools, and I went on to earn several advanced degrees as a first-generation college student. I feel as though my personal and professional journey and access to opportunity and education speak to the realization of the American dream.

I’ve heard so many people talk about what the University means to them—and how ties here run deep.

For example, at commencement, I met Julianne Kapner ’19, who was graduating with a degree in linguistics. Her family proudly includes eight (now nine) Rochester alumni, and five of them came to commencement to celebrate this young woman’s graduation.

At an event on the West Coast, I witnessed another connection when Dr. Sydne Weiner ’65, a radiologist, was talking with Dr. Caesar Luo ’01, ’06M (MD), an ophthalmologist, about a friend with macular degeneration. That friend lived in a retirement community with others who also needed vision care. Sydne asked Caesar if he’d be willing to make a connection with her friend. Not only did that happen, but the two of them ended up creating a vision support group in that retirement community. That’s a powerful alumni connection.

These kinds of stories are more than heartwarming. They tell me we have such an important role in shaping people’s lives, and doing so in a mission-led way.

Creating a Culture of Communication

At the top of Chance Mercurius’s reading list this summer is Radical Candor by Kim Scott, a former manager at Google and Apple. “The book illustrates a new management philosophy, one that I believe in very strongly. The first chapter focuses on how to build radically candid relationships, create a culture of open communication, understand what motivates your team members, and drive results collaboratively.”