Madeline Topkins Michel ’77
A drama teacher receives a top accolade for her unconventional and inclusive approach. 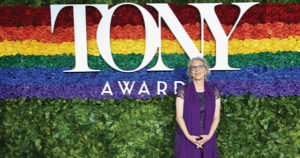 NO DRAMA, PLEASE: Michel says she prefers the wings to the spotlight when it comes to her role as a drama teacher at Monticello High School in Charlottesville, Virginia. “I like the kids to take control.”

When Madeline Topkins Michel ’77 took the stage at the Tony Awards ceremony in June to receive the 2019 Excellence in Theatre Education Award, she quickly asserted that the award wasn’t hers alone—it also belonged to her diverse group of drama students at Monticello High School in Charlottesville, Virginia.

“This award is for all of the students who have found their voice and who speak for themselves, their families, and their community through theater and playwriting,” she told the audience at Radio City Music Hall.

Michel heads Monticello’s drama department, but she came to theater through a side door. An English major at Rochester, she later earned her teaching certification in math and English and as a reading specialist.

She took a job with the Baltimore school district and discovered that the classroom is an inherently theatrical place. When faced with skeptical or unmotivated students, she made her class dramatically compelling. “Really early on, I realized the value of theater in teaching,” she says.

She also coached National History Day teams after joining the staff at Monticello. Students compete by carrying out historical research and presenting their conclusions in the format of their choice. Michel’s teams opted for play performance—and when they brought home national gold medals two years in a row, Monticello’s principal decided it was high time that Michel taught drama. Michel is modest and wry about where her career has taken her. “I’m really not a theater person—despite the Tony Award,” she laughs.

But she’s ardent about inclusive theater. A drama program should reflect the makeup of a school’s student body, but that’s not what often happens, she says. “If you have a group of kids who represent the entire school, then what you get on stage is an energy that’s completely different from what you find at most schools. Everybody’s got a backstory—an interesting backstory— and then everybody learns from everyone else.”

As a teacher, she prefers the wings to the spotlight. “I like the kids to take control,” she says. She helps them stage, choreograph, and direct works that speak to them. And they craft new plays, too. This summer, Michel was working with two groups, each writing a play that they were aiming to have in production this August.

In the wake of the white nationalist rally in Charlottesville in 2017, the Monticello drama program staged student Josh St. Hill’s one-act, rap-narrative play, A King’s Story, which examines a community’s response to violence. Student Courtney Grooms wrote the play Necessary Trouble in 2016, about responses to a high school student attending history class dressed in a shirt printed with the Confederate flag. Last fall, the program performed student Kayla Scott’s play #WhileBlack, about gentrification and the racial profiling she experienced in her hometown. Monticello brought home awards for the production from the Virginia Theatre Association.

“When my kids do a show that really has an effect on an audience, people come up afterwards to hug the actors and the playwright,” says Michel. “These were issues they were thinking about and were disturbed by, but they hadn’t seen them dramatized.”

The key to creating an inclusive theater program is patience, she says. In her classroom, “all that’s expected of you is to do what you’re comfortable with. And sometimes it takes a while for people to get comfortable. I have to be willing to let somebody sit in my class and observe for as long as they feel necessary.”

Michel says that taking part in drama builds students’ confidence and presentation skills, something they can carry with them in any endeavor. But it’s not skill building that really motivates Michel or her students.

“It’s that sense of meeting people who are different and building community,” she says. “Ninth graders are there with 12th graders, and I don’t distinguish you by your experience or your reading level or the classes you’ve had before, or anything like that.”

The stage is somewhere everyone belongs, Michel says. In her drama department, “there’s no gatekeeping.”