Tuning in to Sonic Culture

Tuning in to Sonic Culture 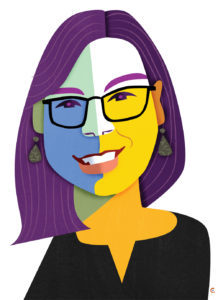 I studied music and Russian studies at Rochester as an undergrad and then did a Fulbright year in Russia. When I came back to Eastman for the PhD program in musicology, I didn’t even know there was a field called sound studies. I had never heard of that. Fortunately, in our first-year graduate student seminar, our professor, Lisa Jakelski, took us through things like gender and music, sexuality and music, race in music—and we had a day on sound studies.

I had just come back from a year in Siberia, and I remember walking around my hometown and having to stop because I heard the sound of crickets. I hadn’t heard that the entire time I was in Siberia. The period of absence really reinforced that sound and made it quite loud, so to speak. So as we were going through the literature on sound studies, all I could think was how sound could place me not only physically but also temporally.

We become conditioned to different listening contexts, and they become part of who we are and how we ground ourselves in a moment in space. When I teach sound studies, I challenge students to go about their business without listening to music and just to listen. What things do they hear? Walking down the street, do they hear construction? How do they know when to cross the street? Is it just by looking at the light that tells you to walk, or is it also from hearing the sound of beeping? Likewise, technologies like Facebook and iPhones use specific sounds for messages and texts. That’s very much a conscious decision on the part of the companies to brand their sonic identity.

Music and sound can tell us a very different story about moments in history than looking at the material or the visual can. I’m researching sonic culture in the Soviet Union, and narratives have really coalesced around material and visual culture. Americans are familiar with the Kitchen Debate—that iconic image of Richard Nixon and Nikita Khrushchev debating the merits of capitalism versus communism while standing outside a model kitchen with fancy American appliances. Who’s got the bigger kitchen, who’s got the nicer appliances?

“We become conditioned to different listening contexts, and they become part of who we are and how we ground ourselves in a moment in space.”

Looking at the sonic side of things, if you look at what Soviet citizens are writing and saying about improved appliances like televisions, radios, and record players, you start to see a narrative about a brand-new listening etiquette. People were saying, “We’re glad for the material reforms, but how do we actually be respectful, sonically?” What they often argued was that the Soviet Union was supposed to have a commitment to the health and welfare of the masses that capitalist countries did not. New York was a very popular foil, as “the city that never sleeps.” That’s not healthy. So the view was, how do we have progress but with an awareness of social impact.

I don’t think there’s a single American sonic culture. But I absolutely do think there’s a growing concern for noise abatement in the United States. A growing group of scientists, architects, musicologists, and just ordinary people are calling attention to it. There are things within our control, like the volume on iPods. But many things are out of our control. Restaurants and bars are becoming much louder. There are studies that show that the louder the music at a bar, the more people drink. So some businesses play music more loudly so that people will spend more money.

I live near the [Rochester pub] Old Toad. If I want to have a meaningful conversation, it’s where I’ll go, more often than not. It’s a good little pub. And it’s quieter.

On the distinction between music and noise: “At its core, it’s a value-based distinction. Music is good; it implies something that’s organized. Noise is bad, noise is disorder, noise is chaos. In the 20th century, a lot of composers pushed against that. And I think about discourses that emerged in the 1980s and 1990s against rap and hip hop— ‘that’s just drums and noise’—that were rooted in racism in addition to aesthetic values. There’s a hierarchy, and it’s something to be aware of but also something to push against.”

On the sonics of the University: “If you’re on the River Campus, the carillon in Rush Rhees Library is a really powerful sonic landmark. That sound places you physically at U of R.”