Before the pandemic, Cross Currents Minority Rowing Program made two gifts to support the University of Rochester’s women’s rowing program. On behalf of Cross Currents, Lydia Boddie-Rice, one of its cofounders, made a $6,500 donation to support the Rochester team and Patricia Rozzo-Leadley, the group’s former coach, donated the program’s rowing shell and oars, valued at close to $4,000. The gifts help continue the mission of Cross Currents, which was founded in 2006 and closed its doors in 2016.

“Cross Currents embraced a vision to foster awareness and increase minority participation in rowing, an underrepresented sport,” says Boddie-Rice, a local artist and social entrepreneur. “Part of our mission was to help diversify the sport and build the teams of the future. We also wanted to introduce rowing as a way to build confidence and community. By partnering with the University’s rowing program, our good work continues.”

When Boddie-Rice first approached John Gaskin, the team’s head coach, about these gift ideas, his first thought was, “Where would this donation have the greatest impact?” Then, he thought about the team’s spring training trip, which has been held every year until COVID-19.

“We plan to use these funds for future training trips. They are integral for team building and technical development as we can get out on the water during a time when that is not possible in Rochester,” says Gaskin. “The team has a full week to bond and develop relationships that will last forever. Having a way to lower the trip’s costs helps us provide a better experience for the student athletes, and it decreases their financial burden.”

Gaskin also notes that the rowing shell and oars that came with the donation will benefit the team for years. “We won’t need to fundraise for this type of equipment now, which really helps in the long run,” he adds. “The name on the shell will stay the same thus providing the legacy and reminder back to Cross Currents.”

This year, the team went to Tampa to train. “We had just wrapped up our training when we heard from the NCAA and the University that spring sports would be canceled,” says Gaskin. “Although we were disappointed that we wouldn’t be able to compete, we were lucky that we were all together and could support each other. That was important for everyone, especially the seniors.”

Cross Currents began back in 2006 when Boddie-Rice decided to learn to row at the Genesee Waterways Center, located near the University of Rochester. A friend of hers ran the center and was surprised that so few people of color in the neighboring community knew how to row nor came to the center. The wish to introduce rowing to those who lived nearby, especially young people of color, became the genesis for what would become the Cross Currents Minority Rowing Program.

“Just a small group of us started the program,” says Boddie-Rice. “We wanted to instill that positive feeling one gets while on the water and when you are in community with others, learning and growing together. All of that helps people—especially youth—feel accomplished, valuable, and joyful.”

Over the next five years, Cross Currents introduced hundreds to the sport. “Many minorities and underserved groups don’t have access to water, don’t know how to swim, and have a fear of the water,” adds Boddie-Rice. “With our youth programs, we wanted to remove all of those barriers and create opportunities so that all those who wanted to could jump onboard, literally.”

Many University alumni, employees, coaches, and students volunteered with Cross Currents, too, including Lisa Norwood, one of the group’s founding members and an assistant dean with the Hajim School of Engineering & Applied Sciences and Rozzo-Leadley, a Spanish interpreter at Strong Memorial Hospital who served as coach for the overall Cross Currents program and head coach for its youth crew. 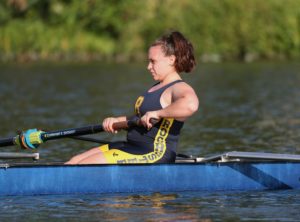 One of Cross Currents former rowers, Alyssa Steger ’22 is a business major and part of the rowing team. She became interested in the sport while attending a summer camp during middle school. “The camp encouraged me to try new things and rowing was one of the extracurricular activities offered. I met Lydia Boddie-Rice there and then joined Cross Currents,” says Steger. “That’s when my love of the sport began.”

Similarly, the University’s rowing program has provided her a community, a strong network of friends, and skills that will transfer from the boat to the classroom and, later, into her professional life.

“Rowing has taught me leadership, time management skills, and more,” she adds. “Believe it or not, I love that we wake up at 5:30 a.m. for our 6 a.m. practices because it makes me feel so accomplished by 8 a.m. Rowing has helped me make and keep a schedule, which has been very valuable as a student.”