NIH researcher Harvey Alter ’56, ’60M (MD) is recognized by Nobel committee for his work to improve blood transfusion safety and reduce the transmission of a potentially deadly virus. 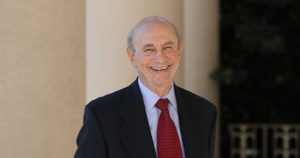 Rochester’s newest Nobel laureate, Harvey Alter ’56, ’60M (MD), once reflected on what he thought was the most dramatic turn in his life.

There were a few, but none so fateful as in 1961, his ninth year in Rochester and his first as a resident at the University’s Strong Memorial Hospital, when he received a draft notice in the mail.

It was a tense time in the Cold War between the US and the Soviet Union, as the nations were locked in a stalemate over the status of Berlin. The American military was on alert, and there was a shortage of doctors among them.

Just before he received the letter, however, and with assistance from Scott Swisher, then the chief of hematology at Rochester and one of Alter’s favorite professors, Alter applied and was accepted to a position at the National Institutes of Health.

“My mentors at Rochester really meant a lot to me,” Alter says. “Dr. Swisher was very influential and helped me get to the NIH and enter public health service before I got to the draft board. It really was a turning point in my life.” 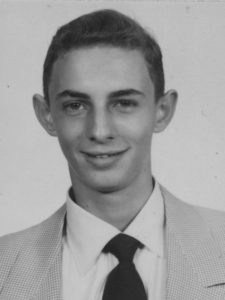 For several days, it looked like he was headed for Fort Dix, New Jersey, rather than Bethesda, Maryland. Then it turned out his appointment at the NIH could supersede his draft notice.

Although Alter says an assignment to the Army would almost invariably have been followed by a career in private practice, he had been headed in that direction anyway, ready to fulfill the dream of his father, a first-generation American who could not gather the means to attend medical school himself.

Instead, NIH led Alter “somewhat reluctantly,” he says, down a path of medical research that would extend 50 years. That long and innovative career as a researcher was recognized this fall, when Alter was named one of three recipients of the 2020 Nobel Prize in Physiology or Medicine. “I think the contributions I made were not the contributions I planned to make,” Alter says. “My contribution was going to be just to be a good doctor. I think I did become a good doctor, and I really owe that to Rochester.”

Alter now holds the title of NIH Distinguished Investigator in the Department of Transfusion Medicine at the institutes’ Clinical Center. His was a long route to hematology, or to hepatology, for that matter. The New York City native came to Rochester as an undergraduate in part because it had a medical school.

“Getting accepted at Rochester medical school was one of the most exciting days of my life,” Alter says. “Everything is a step-wise progression in medicine: the better the place where you start off, the better the place you can go for the next step. Rochester was a great stepping stone, but medicine was also just so intrinsically interesting.”

Beginning at NIH in 1961, Alter worked with geneticist Baruch Blumberg, who was investigating proteins in blood, while Alter was exploring antibodies to those serum proteins. They initiated a collaboration that led to the discovery of hepatitis B, and with that, a Nobel Prize for Blumberg in 1976.

But once hepatitis B had been eliminated from the blood supply, patients who underwent transfusions still developed postoperative liver disease and inflammation. Neil Blumberg (no relation to Baruch Blumberg), a professor in the Department of Pathology and Laboratory Medicine at Rochester, says Alter made the quest for an explanation his life’s work. “There’s no question he was the leader in this effort,” says Blumberg. “Harvey worked on this his entire career.”

In the 1970s, Alter identified the cause of the persistent infections as a new type of hepatitis viral agent, and he coined the term, “non-A, non-B hepatitis” to describe it (hepatitis A virus had been identified at NIH in 1975 and does not transmit through blood). Alter showed that hepatitis B accounted for only 25 percent of post-transfusion hepatitis.

It would take a few decades to be able to isolate and identify the non-A, non-B agent. That’s where Michael Houghton and Charles Rice, the two scientists with whom Alter shares the Nobel, came in. In the late 1980s, Houghton, then a scientist at the Chiron Corporation, succeeded in isolating the virus, which then became known as hepatitis C. Rice, a virologist at Rockefeller University, studied the replication of the virus, leading to highly effective treatments.

“To have seen the first patient that we officially designated as having non-A, non-B hepatitis, and then to see virtually every patient I have now cured of hepatitis C, is something I never could have imagined in my lifetime,” Alter says. “I can’t call that my accomplishment, but it was amazing to be a part of that and to lay the groundwork for the discovery of hepatitis C and ultimately the treatments.”

Blumberg, an expert in blood transfusion immunology who oversees the Medical Center’s Transfusion Medicine Unit, Blood Bank, and Stem Cell Storage Facility, notes that there are other ways to get hepatitis C, and there’s little understanding of its origins or how it can be spread. “But the good news,” he says, “is that it’s no longer spread through transfusion.”

Lynne Maquat, the J. Lowell Orbison Distinguished Service Alumni Professor in biochemistry and biophysics at Rochester, credits Alter as the spark that has led to dramatic improvements in a key area of global health. Maquat, who directs Rochester’s renowned Center for RNA Biology, has conducted research into the structure and function of RNA that has been critical in developing antiviral treatments.

“Harvey enabled the US to start blood and donor screening programs that lowered the cause of hepatitis due to viral risks from 30 percent in 1970 to nearly zero today,” she says. “It’s a big deal.”

Harvey Alter is the 13th Nobel Prize recipient with ties to Rochester and the eighth alumnus to be recognized. To see a full list of Rochester’s laureates, visit Rochester.edu/newscenter/rochesters-nobel-laureates.

This article originally appeared in the fall 2020 issue of Rochester Review magazine.