As commissioner of public health for Rochester’s Monroe County, Michael Mendoza ’12S (MS) has developed a following as the go-to source for community-minded information.

What the NIH’s Anthony Fauci has been to the nation, Mike Mendoza—or, @DrMikeMendoza on Twitter—has been to the Rochester area: a ubiquitous presence on TV and print news, radio, and social media; and the go-to person for the most reliable and up-to-date information and advice, based on the best available science, under relentlessly shifting circumstances. 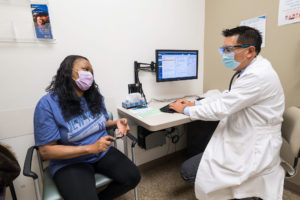 Last spring, the Rochester area fared comparatively well. Hospitals never neared the capacity that they had prepared for, and in mid-October, data reported in the New York Times showed that Monroe County had the lowest rate of infection of any community in the nation with a population greater than 500,000. But cases have risen dramatically since then, and Mendoza, with his characteristic blend of candor and positive community spirit, is helping lead a renewed effort to educate the public.

Mendoza is a native of Chicago who earned his bachelor’s and medical degrees from the University of Chicago, later adding a master’s in public health degree, as well as a master of science degree in medical management from the Simon School, to round out his formal training. Holding faculty appointments in both the School of Medicine and Dentistry and the School of Nursing, Mendoza was widely praised for taking early and decisive action last spring that helped keep infection rates down in some of the traditional hotspots.

For example, in the early weeks and months, Monroe County faced the same challenges as every other region when it came to protecting residents of nursing homes and other longterm care facilities, as well as those who care for them. He called upon Thomas Mahoney ’83M (Res), chief medical officer at Common Ground Health—an organization itself dedicated to forging regional partnerships—to launch a collaborative group among longterm care facilities and hospitals countywide. Mahoney says that kind of leadership was not typical.

“We’re part of national organizations, and I’ve spoken to folks and presented what we did,” Mahoney said in October. “A collaboration like this, thought out by Mike, trying to get community members to work with what the county was doing, was pretty unique.” The county’s efforts included a push, forged by Mendoza, to distribute appropriate personal protective equipment, or PPE, throughout the county.

Mendoza’s job has only gotten harder this fall, however, as a weary public has begun to take less heed of the expert advice he and his colleagues in public health have offered repeatedly. As he told a local news station on the first of December, “We truly do hold the future of the pandemic in our hands.”

This article originally appeared in the fall 2020 issue of Rochester Review magazine.