‘Will you marry me?’

‘Will you marry me?’

According to University records, about 10 percent of Rochester’s alumni are married to other alumni, not to mention the faculty and staff who’ve met their sweethearts on campus. With Valentine’s Day around the corner, we wanted to add a little love to the air and share these on-campus engagement stories.

Marisa and Jamie Maslek met when she was a junior and he was a freshman. They quickly fell in love and knew that someday they would get engaged. Little did Straub Maslek know that that day would come at her fifth-year class reunion.

“It was Meliora Weekend 2018 and to kick it off, we went to Mt. Hope Diner with some friends we hadn’t seen in a while,” says Marisa. “Jamie was acting really weird—he wouldn’t even sit next to me.” Later, she learned that he had the ring in his pocket and was afraid she’d spot it if he got too close.

After brunch, the couple and their friends headed over to the Meliora letters that adorn Eastman Quad every Meliora Weekend. That’s where Jamie planned to pop the question.

“I wanted to drop down on one knee without her seeing me do it,” he says, adding that he always knew he wanted to propose on campus. “So, I told her I wanted to take a fun picture of us doing a piggyback ride.” Marisa was game. She turned around so her soon-to-be fiancé could hop onto her back. One of her friends then told her to turn around again.

“That’s when I saw him kneeling,” she says, adding that she was completely surprised, especially since Jamie isn’t a public person and there were many people were nearby. After the proposal—and a happy head nod and a big “yes” from her—the Quad erupted in applause.

“We took a ton of pictures, called everyone, and FaceTimed our families,” says Jamie. “Pretty quickly, the University heard about the proposal and posted some pictures on social media. Within about two hours, it seems like everyone around us knew we were engaged. People were direct messaging us and saying, ‘congratulations’ nearly everywhere we went.”

The couple went ahead and made their wedding plans but then the pandemic hit, prompting them to change course a bit. Although they did have small ceremony in Rochester in last June, which was followed by a short honeymoon weekend in Canandaigua, they are planning a bigger bash later this year.

Today, the couple lives in Alexandria, Virginia. Marisa is a school psychologist (she came to the area in 2014 to pursue a master’s degree at Gallaudet University). Jamie joined her after getting his Rochester diploma and is now wrapping up his PhD in physics at the University of Maryland.

The couple chose Rochester for similar reasons—for them, saying “I do” to Rochester was a bit like finding that perfect wedding dress. “I visited and kind of fell in love with the place and its flexible Rochester Curriculum,” says Marisa, a double major in psychology and American Sign Language.

It was the same for Jamie, a double major in physics, and optics. “When I learned I never had to take a history course again and that I could pursue what I really loved, I knew it was the place for me,” he adds, with a chuckle.

For their first year on campus, Chris Miller and Katie Weiner lived in Tiernan Hall on the residential quad. Although they met on their first day at college, they didn’t start dating until later, after they both interned in New York City the summer before their senior year.

Five years later, Chris and Katie made plans to go to their class reunion during Meliora Weekend. Chris thought that would be the perfect opportunity to propose. All their friends would be there, including those from her basketball team and his Phi Kappa Tau fraternity, and Katie probably wouldn’t expect it.

For Meliora Weekend, the plan—or so Katie thought—was to spend the weekend with their former roommates, whom they hadn’t seen in a long time. They even planned to stay in separate hotels so they could spend more time with them.

On the Saturday morning of that Meliora Weekend, Chris was anxious to get Katie and their gang to the scheduled class photo shoot, which was to be held on the steps leading up to Eastman Quad. He brought just a few friends into the loop regarding his proposal plans. They helped him corral Katie, who was a bit bewildered at how important it seemed to be for Chris to get to the shoot.

“I wanted to do it then because the set up would be ideal with all of our friends there,” says Chris. After the official photo was taken, Chris worked up his courage. He turned to Katie for the big moment, but she was engaged in a conversation with a friend she hadn’t seen in a long time. Getting her to focus on him was more difficult than he anticipated.

“I was actually a little annoyed with him and wondered what could possibly be so important at that moment,” she says. “But then, I turned around and that was when he started whispering in my ear. I thought ‘oh my, I think this is it,’ and that’s when he fell to one knee.”

“I don’t think either of us said any actual real words at that point,” says Chris. “Instead, I held out the ring, she nodded, and then everyone cheered.” The class photographer rushed over and snapped lots of pictures and so did their friends.

“Before we knew it—and before our families knew it was a done deal—we were on the University’s Instagram page,” he adds. “Then, throughout the weekend, everyone seemed to know we had just gotten engaged.”

Later that morning, while sitting outside Lattimore Hall and eating mac and cheese from a nearby food truck, Chris actually did utter the words, “Will you marry me?” And, of course, Katie said yes. That night, they went to the class dinner, which turned out being like a big engagement party.

The couple plans to get married later this fall in Lake George, NY, a few hours from where they live in Boston. Chris, a computer science major, works at a tech startup in the area, and Katie, a biochemistry major, is pursuing a PhD in molecular biology at Harvard University.

Clare Boehly  and Vinny DeRienzo met as underclassmen, but their love story began a few years later, after Clare returned from a semester in London. She was a senior majoring in psychology, and he had just earned his degree in psychology and was doing a Take 5 program in contemporary religious diversity.

When Clare returned to campus, she decided to rejoin the club tennis team. One of Vinny’s Sigma Nu fraternity friends was also on the team, so they all began to hang out and enjoyed going to trivia nights at the Old Toad, a traditional English pub near campus. Those game nights soon evolved into date nights—and the rest is love history.

Vinny knew he wanted to propose on campus, and he thought he came up with the perfect plan, which went down, the couple says now, as a comedy of errors. “I had this elaborate ruse in mind,” he says. “I told her that there was an alumni happy hour at Rush Rhees Library and that a bunch of our friends would be there.”

Clare was game, but then . . . she had some kind of major allergy attack and didn’t want to go. Vinny tried to mask his panic. He thought quickly and told her that there’d be an open bar.

Clare rallied. They grabbed their coats and headed out the door. But, being February in Rochester, Vinny’s car was encased in ice. He had to use three different types of ice scrapers to free it. As if that wasn’t enough, his car wouldn’t start. Ultimately, they called for an Uber.

Once at the library, Vinny told Clare he wanted to stop by the Wells Brown Room before going to the happy hour—for old times’ sake. (She didn’t know that he reserved the room for the proposal. And thank goodness she didn’t see the reserve sign on the door, which read, “Hold from 5 – 6 pm for alumni proposal.” As they entered, Vinny managed to hide that unforeseen note with his head.)

“We walked into Wells Brown and I noticed someone was there, studying,” says Clare. “That’s when Vinny started getting all lovey dovey. I’m pretty sure I asked him something like ‘what are you doing?’” (That person was actually a photographer Vinny had hired to capture the proposal.)

Once the moment came, Vinny forgot the whole speech he had planned. He did smile and hand her the ring though, which she happily put on.

“After that, we headed to the Old Toad where Vinny arranged to have many of our friends and family waiting for us,” adds Clare. “He pulled it all off and I was completely surprised by everything.”

The Rochester-based couple plans to marry this summer at a winery near Lake Ontario. They’ll take a mini-moon to Boston and then a longer honeymoon next year, to a warm place. In the meantime, they’ll keep working—she as a teacher in the Rochester City School District and he as a physician assistant at Strong Hospital—and planning for their future together.

Did you meet on campus or get engaged here? If so, we’d love to hear about it. Share your story on social media and use #wemetatUR. 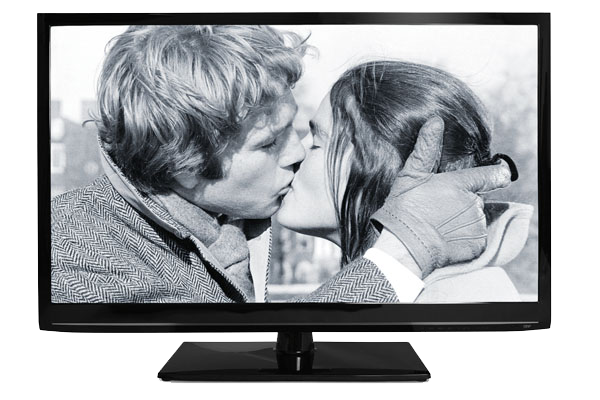 Check out these timeless love-centered stories, all based in Rochester research

What’s the secret ingredient that makes a happy couple or family?
Analysis shows those who are psychologically flexible have better romantic and family relationships.

How do we relate? Psychologist’s research probes matters of the heart.
While a bad marriage can cause heartache, a good one can help keep your heart ticking. Literally.

What’s your love story?
Talking with your partner about movies may actually increase your odds of finding your own happy ending.

The University of Rochester recently launched Together for Rochester, a one-year fundraising and engagement campaign designed to make life better for the University community and the world—just like a little love can do. Learn more about the campaign here.