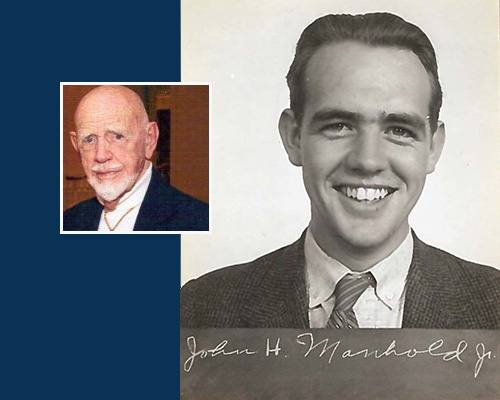 John Manhold now and then.

The Japanese attacked Pearl Harbor, the United Kingdom broke the Enigma Code, and the GI Bill was signed into law. In popular culture, Citizen Kane was released, Dumbo became a hit, and people were singing Glenn Miller’s “Chattanooga Choo Choo.” Gas was 12 cents a gallon, the average house was $4,000, and people earned about $1,750 per year.

But, that’s not all. It’s also the same year that John Manhold graduated from the University of Rochester.

Since then, Manhold has led a full life as an accomplished dental researcher recognized for wound healing studies, a consultant, and a faculty member. He also spent many years as an attending pathologist at the New Jersey Medical Center.

Manhold is also a Navy veteran of World War II and Korea and a gifted sculptor, golfer, and competitive shooter. He also enjoys playing the guitar, which he picked up as a hobby when he was in his 60s. Manhold is a prolific reader, too, and, today at 101 years old, he writes book reviews for Amazon and is about to publish a memoir of his life. Manhold and his wife of 50 years, Kit, are also adventurers and have sailed thousands of miles around the world, often in their 42-foot yacht, Ketita II.

At Rochester, Manhold was an English major and a member of the Sigma Chi fraternity. He was also a fencer, football player, and boxer, a pastime that also helped him pay his way through Harvard School of Dental Medicine. To mark 80 years since Manhold graduated, here’s a look at his college admissions application from 1937.

“There is much to learn by looking at the past,” says Manhold. “My undergraduate education at Rochester prepared me well for a very full career and life. It helped me hone the skills needed to adapt to changing times, including changes in technology, society, and scholarship.” 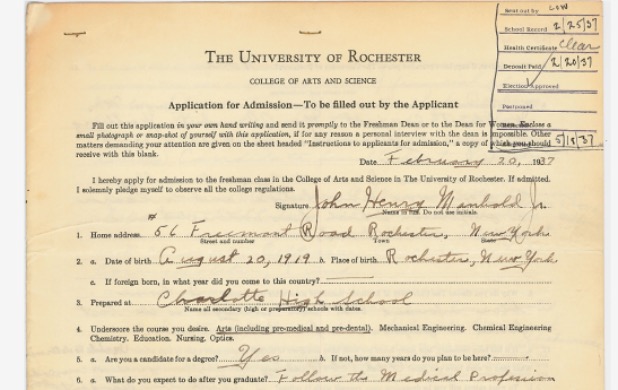 An excerpt from Manhold’s 1937 college admissions application, in which he notes his goal of entering the medical profession—an objective he achieved.

During high school, Manhold’s favorite books were about Germany, Napoleon, and Lincoln and he regularly read Life magazine.

In Manhold’s college essay—aptly titled “The Story of My Life”—he says, “I arrived on the hot summer afternoon of August 20, 1919 in Rochester, New York at five-fifteen to the accompaniment of the doctors vocal solo, ‘arriving on the Five-Fifteen,’ which was the current song hit.”

Manhold also notes this in his essay, “When I was a small child, I decided that I should like to follow the medical profession. There is no apparent reason why I should decide in favor of this profession. However, as I have grown older, the desire has grown strongly and for this reason I hope to obtain from college all possible knowledge to help me gain my ambitions.”