An opportunity of a lifetime

An opportunity of a lifetime

Two alumni reflect on their roles at the 2020 Tokyo Olympics

Alumni Takuya Adachi ’04S (MBA) and Yuske Shimizu ’02 had the opportunity of a lifetime this past summer. Adachi, working in network technology, and Shimizu, volunteering as an interpreter, were part of the 2020 Tokyo Olympics.

Adachi earned his MBA from Simon in 2004, sponsored by his company, NTT West. After graduating, he returned to work for the company, through which he received his assignment at the Olympics. He was tasked with working as a venue telecom manager for the Tokyo Aquatics Centre, at which the games for swimming, diving, artistic swimming, and para swimming were held. His team was responsible for the design and implementation of the telecom networks, and Adachi oversaw the entire building network– including security services, WiFi, and broadcasting. 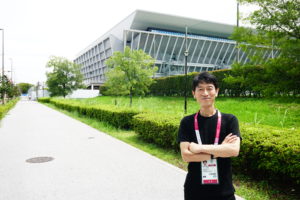 Reflecting on a normal day working at the Olympics, Adachi says, “We communicated with those who experienced problems in telecom networks, analyzed and resolved them. It was an international environment, with those from various countries all over the world.”

Yusuke Shimizu graduated in 2002 after studying political science. While at the University of Rochester, he enjoyed participating in the intramural soccer team, taking piano lessons at Eastman, and being active in the theatre department. Shimizu pursued his studies at Cambridge then began working at the Japanese Foreign Ministry, before joining Google’s Government Affairs and Public Policy department. While browsing an alumni magazine of the foreign service, for which he served from 2006 to 2021 in Spain, Mexico, and the United Nations, he saw that the Olympics committee was searching for volunteer interpreters. 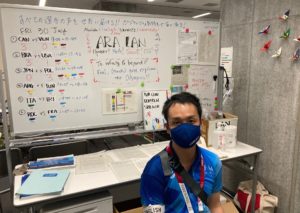 Yuske Shimizu ’02 with a whiteboard used in the Ariake Arena

Shimizu worked as an interpreter for both the Olympics and the Paralympics in Japanese, English, Spanish, and Chinese for volleyball, basketball (including the gold medal match between the US Dreamteam and France), soccer, and wheelchair basketball. He says, “Our principal task was to translate for the on-camera interviews conducted by the Olympic broadcasting system after the games, which were shared throughout the world. We also interpreted for interviews in the “mixed zone,” which is an area that all athletes must pass through to provide pen journalists like the New York Times with opportunities to interview players and coaches.”

Both Shimizu and Adachi were grateful for the opportunity to be involved in such an important global event. Specifically, Shimizu enjoyed the chance to be behind the scenes and interact with the athletes. He says, “It was a wonderful experience to be able to see and interact with the players up close. Being on the courts and the fields allowed us to see the personalities of athletes and small details that aren’t usually broadcast.”