What Makes a Great Coach?

What Makes a Great Coach?

The much admired offensive coordinator for the Buffalo Bills says relationships are key. 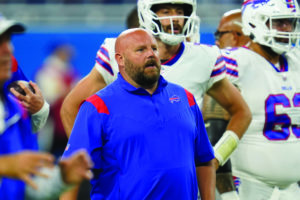 OFFENSIVE RECORDS: Joining the Buffalo Bills in 2018 as offensive coordinator, Daboll helped lead the team to the 2020 conference championship—the team’s first since 1993—as the Bills set franchise records for points in a season and touchdowns along the way.

After leading the Buffalo Bills to a record-setting season in 2020, offensive coordinator Brian Daboll ’97 has emerged as a top candidate to become a future head coach in the National Football League.

“Daboll continues to cement his status as an offensive mastermind capable of creating mismatches anywhere on the field,” wrote Conor Orr in Sports Illustrated in September.

Daboll has been calling offensive plays for the Bills since 2018 and last year was named the Associated Press’s NFL Assistant Coach of the Year after the Bills set franchise records for points (501) and touchdowns (60), finished second in the league in total yards (6,343), and advanced to the American Football Conference championship for the first time since 1993. Daboll interviewed for head coaching vacancies with the New York Jets and Los Angeles Chargers but ultimately remained in Buffalo–his hometown.

Daboll’s coaching path began after his playing career ended abruptly at Rochester. The economics major suffered a career-ending injury after a helmet-to-helmet collision playing defensive back his junior year. Daboll hung up his cleats and grabbed a clipboard.

“I hung around my senior year and worked with the coaches,” he says. “I loved it.”

He has coached for various college and NFL teams over the past 24 years, winning five Super Bowl rings with the New England Patriots and a college national championship with the University of Alabama.

Daboll has won respect and affection from players as well as observers of the game. 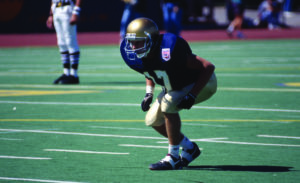 ALWAYS A YELLOWJACKET: Daboll played as a defensive back on the football team at Rochester before an injury during his junior year sidelined him, and he became a volunteer with the coaching staff.

Who was the first coach who made an impact on you?

Coach Jerry Smith and the coaches at St. Francis High School [in Hamburg, New York]. They were instrumental in developing some of the philosophies I believe in. They were smart, they were tough, and they taught us how to win on and off the field.

What skills or life lessons did you learn at Rochester?

I learned time management, problem solving, and how to develop relationships.

You’ve been an assistant under two legends—Bill Belichick with the Patriots and Nick Saban at Alabama. How are they different, and how are they similar?

Both are committed to the organization and have core principles and values they believe in. They are definitely very similar. I would say the main difference is that Nick is probably a better dresser.

How is coaching professional athletes different from coaching in college or even high school and grade school?

Some things are similar, but when you are working with college or even younger athletes, you are developing the player, but you are also developing the person. You’re helping them with their life skills, and you need to be a mentor. That’s the main difference.

Does a great coach have to be a good cop as well as a bad cop? To know how to soothe players as well?

Yes, I think it all starts with relationships. You really have to get to know your players. Players don’t care how much you know until they know how much you care. Taking time and investing in people helps down the road when adversity strikes.

Are you a boss, a friend or confidante, or all of the above to your players?

I’d like to say that I’m a leader. You have to develop relationships with your players, but you also have to set a standard and an expectation that you are going to hold them accountable to. Once a player can trust you and you earn their respect, they’re more accountable to you.

What are qualities all great coaches have in common, whether it’s football, soccer, field hockey, or any sport?

We talk about how “calm breeds calm,” and I think that’s important in today’s age—being able to stay levelheaded when things aren’t going well and then being able to help players and your fellow coaches deal with adversity. With all the social media and new technology out there, it’s a different world from when I grew up. You need to be able to embrace that and help them deal with adversity. That takes a lot of time and dedication.

You also have to know what you’re talking about, and the players have to believe that you know. You have to find a way to communicate with players so they can understand. You have to be authentic. You can adapt and learn things from coaches that you’ve worked with in the past, but the minute you try to be someone else, people can see right through that.

This article originally appeared in the fall 2021 issue of Rochester Review magazine.