This Wisconsin-raised, Ecuadorian American cellist is finding her groove at the Eastman School of Music 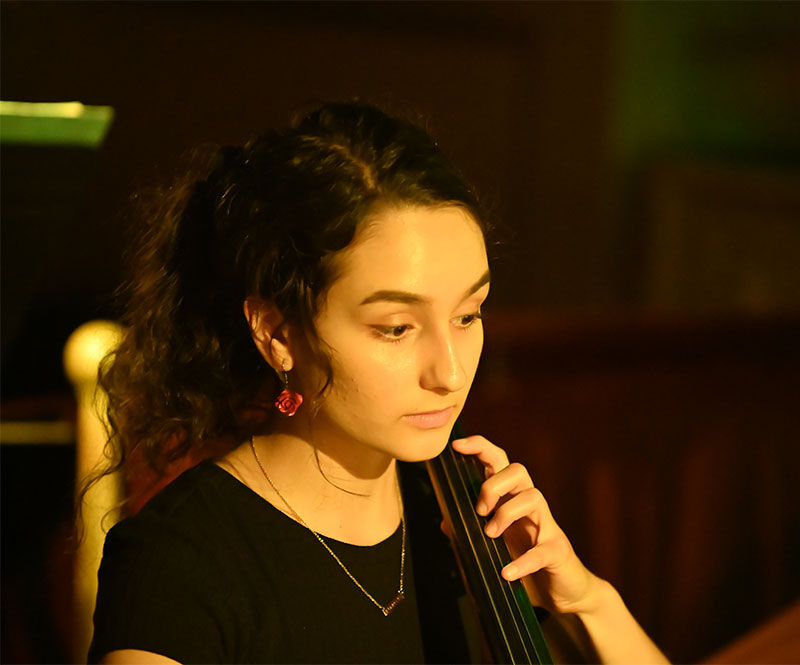 When Abby Hanna ’25E—an applied music major at the University of Rochester’s Eastman School of Music—was in fourth grade, one of her teachers, Ms. Borden, used to bring her cello to class. The students loved listening to her play, and they begged her for lessons. During independent reading time, Ms. Borden would take those interested down to the library and they’d take turns playing the cello. Hanna, who’d been playing the piano since she was five years old, loved it. She took to it quickly, too.

Ms. Borden was struck with Hanna’s passion for the instrument and soon talked to her parents about their daughter’s budding talent. She told them about the Milwaukee Youth Symphony Orchestra’s (MYSO) program called Progressions, which provides free instruments and lessons to musically-inclined youth from underrepresented backgrounds. Hanna, an Ecuadorian American, soon became involved and stayed with Progressions and the MYSO for 10 years.

Hanna’s mother immigrated here from Ecuador as a teenager, with a dream to earn a college degree in the U.S. “My mom moved in with her godmother in California and then went to, and graduated from the University of California San Diego,” says Hanna. “She’s a role model to me and to many women in our family—she’s shown us all that we can achieve our goals.”

Neither Hanna’s mother nor her father are musicians, although she notes that music is a big part of Ecuadorian culture. Hanna experienced that first-hand, as she spent many summers with relatives in Ecuador. Hanna has an ear for languages, too, and is fluent in Spanish, well-versed in German, and is learning Italian on her own for fun. She plans to learn German and French soon.

Hanna is proud of her cultural roots and how they are helping her shape her identity as a young woman and a musician. For the past four years, she’s been part of the Sphinx Organization, a social justice organization dedicated to transforming lives through the power of diversity in the arts. “Growing up, I didn’t know about many Latino composers or musicians,” she says. “Then I got involved in Sphinx and started learning more about musicians who had similar backgrounds as me, which has really inspired me.”

She adds, “It can be a struggle for people who come from marginalized backgrounds to excel in music, but it has never deterred me or been an obstacle. It’s something I recognize and want to change by being an example to others.”

Hanna is grateful to be a recipient of the Anne M. Buxton Scholarship*. “Because of this scholarship, I don’t have worry about finances and neither does my family,” she says. “This generous support lifts that burden for us and opens a lot of doors for me.”

Although Hanna is a first-year student, she’s already had some standout experiences at Eastman. “Rehearsing in Kodak Hall is amazing,” she says. “It’s such an incredible space—the stage, chandelier, balcony, everything about it is beautiful and inspiring, and the acoustics are incredible.”

When Hanna is not in class, practicing her cello, or rehearsing for her orchestra and chamber groups, she enjoys spending time with friends. She finds that friendships naturally blossom out of a shared interest in music. For example, some students have recently formed a boleros group, which, she says, is the romantic type of Latin music. Started by Christopher Sanchez ’23, ’23E, a vocalist from the Dominican Republic, the group now includes Hanna, a pianist, two classical guitars, and a viola player. They hope to add a percussionist soon. “We’re finding our groove and it’s a lot of fun,” says Hanna.

*The Anne M. Buxton Scholarship was established in 2010 by the estate of Anne M. Buxton ’54, who was a music teacher in the Washington, D.C. public schools before her retirement. As a result of Buxton’s generous bequest, the endowed scholarship now supports more than 30 students annually.

Enjoy this free Spotify list featuring some of the Latinx music that Hanna recommends.

Endowed scholarships [link to CoS landing page] make a difference in lives of students like Hanna. For information on how you can support musicians like her, contact Aubrie Willaert, Executive Director of Eastman Advancement. Learn more about the Eastman Music School and 100 years of music, too, and help us honor a century of music and celebrate the century to come.