A noted conductor hopes to improve music education for young people in the Twin Cities, one beer at a time. 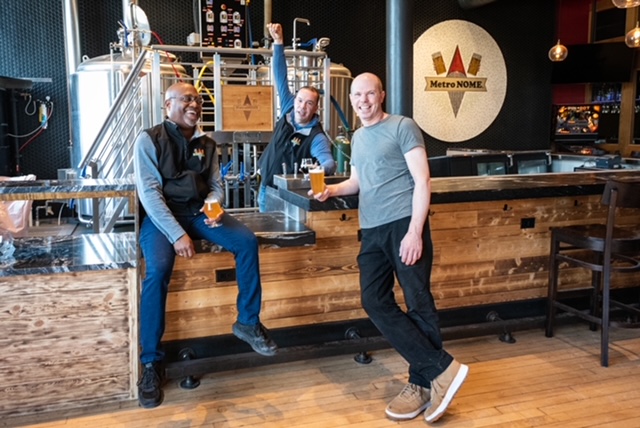 When it comes to sharing a love for music, orchestra conductor William Eddins ’83E, ’86E (MM) is putting his money where his mouth is. And he’s hoping beer aficionados in the Twin Cities will put some of their money into an effort to help a community share music.

Eddins, whose résumé as a conductor includes a 10-year position at the Chicago Symphony Orchestra as well as guest and visiting roles throughout the United States, is opening a brewery in St. Paul, with some of the proceeds going to provide musical education and instruments for the young people in the area who otherwise would have little access to such resources.

Named MetroNOME (the acronym stands for “nurture outstanding music education”), the brewery is set for a grand opening in June. Established by Eddins and business partner Matt Engstrom, both home brewers, the business includes a tap room and rental space and a digital and audio production facility that will be available for creating content focused on music education.

“We want to make sure that every kid in this area who wants to have music in their lives has the opportunity to do just that,” he says.

As a student at Eastman, Eddins turned to conducting as a sophomore. Until then he had been focused on piano, a solo pursuit he began at age 5. Because 18th- and 19th-century music forms the core of Western orchestral repertoire, that meant there were no keyboard orchestral parts in Brahms or any other classical composer he had studied and appreciated growing up.

He considered conducting just another “tool in my toolkit” for years until “an epiphany moment” in the late 1980s. He was practicing with an orchestra (“who shall remain nameless,” he says), doing readings of mid-century American music, when he found himself not being able to follow the conductor.

“I was so mad,” he recalls. “I was furious. All I wanted to know was where we were, and the conductor was not being a help at all. I said, ‘Nope, Bill, you’re going back into conducting. You’re not going to let your friends and colleagues go through their entire musical careers without seeing at least one clear downbeat.’ That’s an exact quote.”

During the 2021–22 academic year, he is serving as visiting director of orchestras and conductor of the symphony orchestra at University of Illinois at Urbana-Champaign. Before that he served as music director of the Edmonton Symphony Orchestra from 2005 until 2017, which led to a career highlight at Carnegie Hall in May 2012.

A frequent guest conductor of major orchestras throughout the world, Eddins regularly conducts the Jazz at Lincoln Center Orchestra with soloist Wynton Marsalis and has collaborated with notable artists such as Renée Fleming ’83E (MM), Yo-Yo Ma, and Itzhak Perlman. He served as resident conductor of the Chicago Symphony Orchestra from 1997 to 2003

“Conducting is about trying to make the many, one,” he says. “You have 80 or 90 or however many people on stage, and we all have to have the same understanding of what is going on at any particular moment. And that’s difficult.”

He also credits an Eastman course on ethnomusicology taught by Ellen Koskoff with introducing him to the music of India, China, and the Pacific. “This course changed my life,” he says.

As a child brought up on classical, jazz, and rock, what he heard in the classroom broadened his understanding of how different musical concepts are reflective of the societies they come from—and what that understanding means for human connection on a global scale.

He sees the new socially focused brewery as an extension of his efforts to help create that kind of connection.

“Music teaches all these abstract things—to listen, to play together, to be with other people from other backgrounds,” he says. “It just expands our understanding of who we are as human beings, of who others are in other cultures.”

When will Eddins consider the start-up a success?

“When we have to open up MetroNOME 2 in some other city and start the whole funding process over again there,” he says. “I really hope it comes to that point.”

This article originally appeared in the spring 2022 issue of the Rochester Review magazine.