Ringing that Bell: Jack Harrison is proof that anything is possible

Ringing that Bell: Jack Harrison is proof that anything is possible

This 2020 Golisano Children’s Hospital Miracle kid is doing it all—and inspiring others with his courage and big smile along the way. 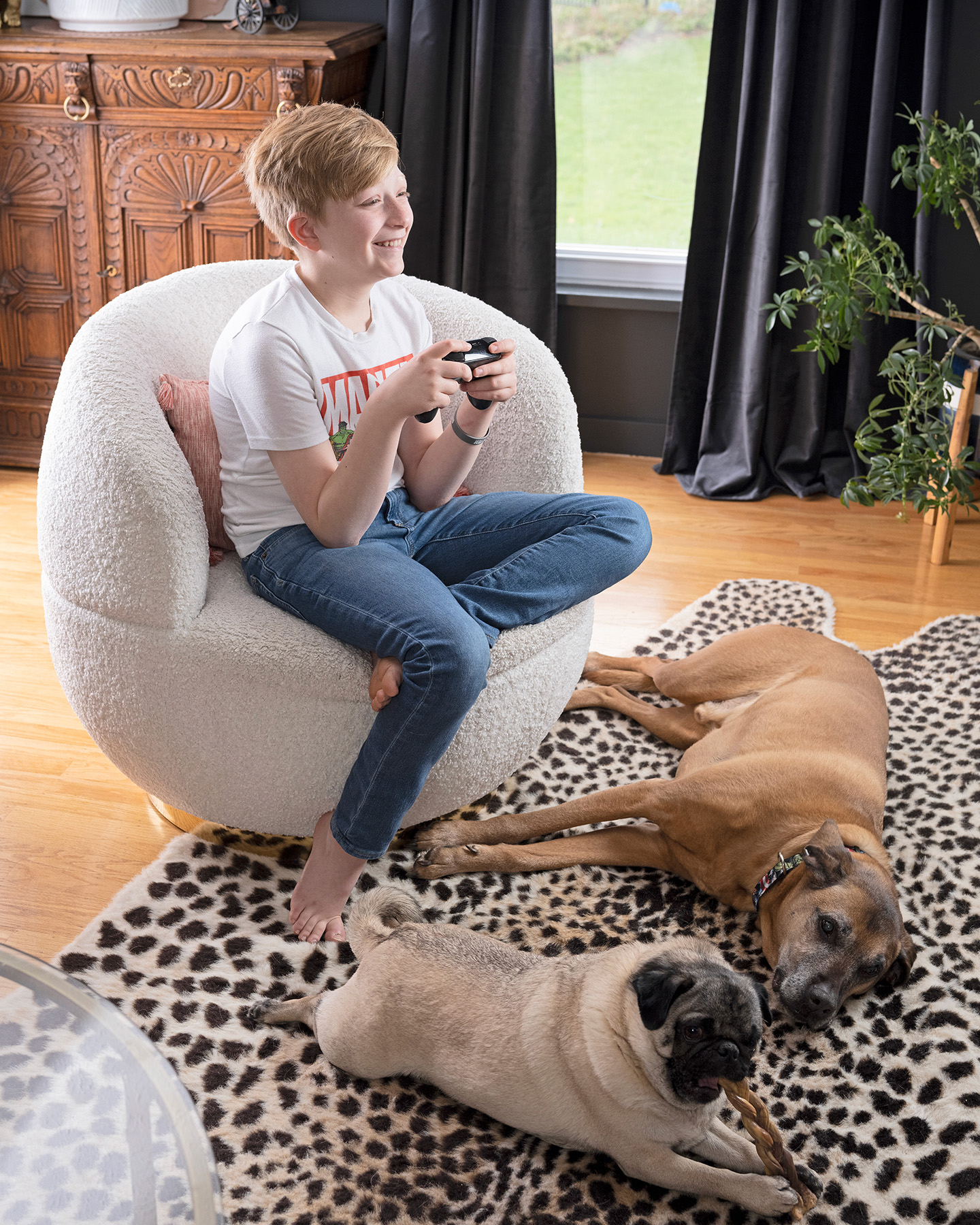 During Jack’s treatment, the Harrisons brought home a puppy, a pug named Winston. Neither Winston nor Cooper, the other family dog, is ever far away from Jack and his brother, Eli.

Ten-year-old Jack Harrison loves his Marvel T-shirt. He got it at Comic-Con in New York City in October 2019 when he was on a trip with his grandmother and big brother, Eli. That’s when he met Paul Rudd—actor and Ant Man star. Rudd autographed everything of Jack’s, even his wheelchair.

Today, Jack doesn’t need a wheelchair. A brain cancer survivor and a 2020 Golisano Children’s Hospital Miracle Kid, he prefers to ride a bike. “He loves to do everything,” says Sara Harrison, Jack’s mom. “We’re living a very different life than we did a few years ago.”

In 2018, the Harrisons, a military family now living in Fairport, N.Y., were living in Germany. Sara and her husband, Eric—a lieutenant colonel in the Army—started to notice that their son was slipping and falling more than the typical six-year-old. His handwriting changed drastically, too. They knew something was going on. They took Jack to several German physicians and specialists and soon learned that their son had astrocytoma, one of the most common types of brain cancer. A second opinion with the Children’s Hospital of Philadelphia confirmed Jack’s diagnosis. A tumor was lodged deep in his brain and needed to be treated.

After getting a variety of opinions on next steps, the family turned to Golisano Children’s Hospital in Rochester, Eric’s and Sara’s hometown. An Army transfer followed. Soon, David Korones, MD, professor of pediatrics, oncology, and neurology, became Jack’s physician. Korones and a much-trusted team at the hospital guided Jack and the Harrison family through a 60-week chemotherapy plan.

During treatment, the old Jack started coming back. His cognition improved and the tumor started shrinking. By June 2019—nine months into chemotherapy—Jack was buckling his own seatbelt again. His mom cried every time she heard it click.

In November 2021, Jack finished his 60th round of chemotherapy. He finally got to ring the bell in the hospital lobby—the one that marks the end of treatment. When he hit that bell, the lobby—which was full of Jack’s health care team along with his family and friends—erupted with applause and joyful tears.

Today, Jack is thriving. He goes in for checkups every few months, but otherwise, he’s doing what typical 10-year-old boys do: making (and devouring) cookies with his mom, playing video games with his brother, sledding fast down big hills. He enjoys swimming, too, and he’s found a passion for theater.

Since ringing that bell, Jack has been in 10 theater productions, most recently as Prince Eric, the male lead in Gananda Community Youth Theater’s production of The Little Mermaid. He even sang a solo in it. “Jack sings like an angel,” says his mom. “And, he is fearless. Getting on stage, going through chemo, Jack has done—and is doing—it all. He inspires us and so many others with his courage.”

Although Jack loves performing, someday he wants to be a nurse. “I want to help kids like me, just like my nurses did,” he says.

Sara reflects on the impact of Jack’s health care team on their family. “Each week, while Eric and I waited for Jack to finish his three-hour treatment, the Golisano team was there for us, answering our questions, holding our hands—they became part of our family,” she says. “We felt loved. Golisano got us all through this.”

She adds, “After coming out on the other side of cancer, I don’t sweat the small stuff anymore. Jack is healthy and happy, and he lights up every room with his big smile. What could be better than that?”

Find this story and more good things for University of Rochester alumni and friends in the summer issue of Buzz magazine.