John H. Thomas, professor of mechanical and aerospace sciences and of astronomy at the University of Rochester, has been named a fellow of the American Association for the Advancement of Science.

The AAAS elected Thomas for his career of elucidating the physics of the sun and other stars, and for the impact he has made on astrophysics as editor of astrophysical journals.

"Jack has had a dramatic impact on everyone in the solar physics community, so it's no surprise he was elected," says John Lambropoulos, chair of the Department of Mechanical Engineering. "We're so used to Jack excelling in his research and teaching that it would be easy take his high standards for granted. It's wonderful to have him recognized this way by his colleagues all around the globe."

Thomas's research has focused primarily on the sun's magnetic field and how that field gives rise to sunspots on the sun's surface. He has modeled the structure and dynamics of sunspots, including the motion of waves across them and the flow of material inside. In the early 1980s, Thomas originated the concept of probing beneath sunspots by observing acoustic oscillationsessentially "sunspot seismology"to gain previously unknown information about the sunspots' structure.

In addition to electing Thomas for his research, the AAAS chose Thomas for his broader contributions to the solar community, most notably for 10 years as scientific editor of the foremost journal in the field, The Astrophysical Journal. He was also recognized for chairing the Solar Physics Division of the American Astronomical Society from 1995 to 1997.

In his time at Rochester, Thomas has served as an associate dean for graduate studies in the College of Engineering and Applied Sciences (now the School of Engineering and Applied Sciences) and for eight years as University dean of graduate studies. In 1993, Thomas received a Guggenheim Fellowship for his research on solar and stellar magnetic fields.

The American Association for the Advancement of Science, founded in 1848, is the world's largest science and engineering federation, with over 144,000 members. AAAS fellows are selected annually for their efforts on behalf of the advancement of science. 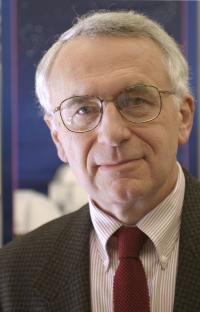 Jack H. Thomas, Fellow of the American Association for the Advancement of Science