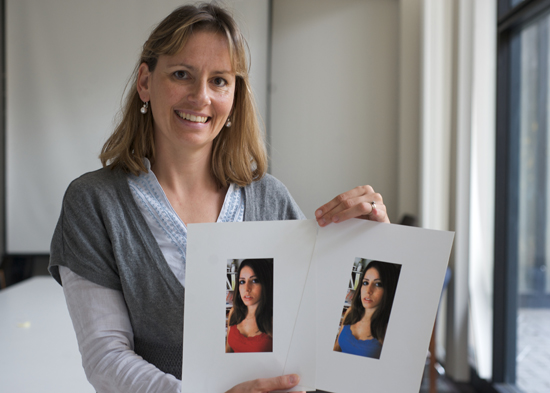 'Psychologist Daniela Niesta holding one of the images used in the study. Participants were asked questions including: Imagine that you are going on a date with this person and have $100 in your wallet. How much money would you be willing to spend on your date?'

A groundbreaking study by two University of Rochester psychologists to be published online Oct. 28 by the Journal of Personality and Social Psychology adds colorliterally and figurativelyto the age-old question of what attracts men to women.

Through five psychological experiments, Andrew Elliot, professor of psychology, and Daniela Niesta, post-doctoral researcher, demonstrate that the color red makes men feel more amorous toward women. And men are unaware of the role the color plays in their attraction.

The research provides the first empirical support for society's enduring love affair with red. From the red ochre used in ancient rituals to today's red-light districts and red hearts on Valentine's Day, the rosy hue has been tied to carnal passions and romantic love across cultures and millennia. But this study, said Elliot, is the only work to scientifically document the effects of color on behavior in the context of relationships.

"It's only recently that psychologists and researchers in other disciplines have been looking closely and systematically at the relationship between color and behavior. Much is known about color physics and color physiology, but very little about color psychology," said Elliot. "It's fascinating to find that something as ubiquitous as color can be having an effect on our behavior without our awareness."

Although this aphrodisiacal effect of red may be a product of societal conditioning alone, the authors argue that men's response to red more likely stems from deeper biological roots. Research has shown that nonhuman male primates are particularly attracted to females displaying red. Female baboons and chimpanzees, for example, redden conspicuously when nearing ovulation, sending a clear sexual signal designed to attract males.

"Our research demonstrates a parallel in the way that human and nonhuman male primates respond to red," concluded the authors. "In doing so, our findings confirm what many women have long suspected and claimed  that men act like animals in the sexual realm. As much as men might like to think that they respond to women in a thoughtful, sophisticated manner, it appears that at least to some degree, their preferences and predilections are, in a word, primitive."

To quantify the red effect, the study looked at men's responses to photographs of women under a variety of color presentations. In one experiment, test subjects looked at a woman's photo framed by a border of either red or white and answered a series of questions, such as: "How pretty do you think this person is?" Other experiments contrasted red with gray, green, or blue.

When using chromatic colors like green and blue, the colors were precisely equated in saturation and brightness levels, explained Niesta. "That way the test results could not be attributed to differences other than hue."

In the final study, the shirt of the woman in the photograph, instead of the background, was digitally colored red or blue. In this experiment, men were queried not only about their attraction to the woman, but their intentions regarding dating. One question asked: "Imagine that you are going on a date with this person and have $100 in your wallet. How much money would you be willing to spend on your date?"

Under all of the conditions, the women shown framed by or wearing red were rated significantly more attractive and sexually desirable by men than the exact same women shown with other colors. When wearing red, the woman was also more likely to score an invitation to the prom and to be treated to a more expensive outing.

The red effect extends only to males and only to perceptions of attractiveness. Red did not increase attractiveness ratings for females rating other females and red did not change how men rated the women in the photographs in terms of likability, intelligence or kindness.

Although red enhances positive feelings in this study, earlier research suggests the meaning of a color depends on its context. For example, Elliot and others have shown that seeing red in competition situations, such as written examinations or sporting events, leads to worse performance.

The current findings have clear implications for the dating game, the fashion industry, product design and marketing.

To view the full text of the paper, visit the Journal of Personality and Social Psychology Web site at: http://www.apa.org/journals/psp/.

Chicago Tribune
The color red is an aphrodisiac for men, study finds
(October 28, 2008)