George Eastman to be Honored in Bronze at the University of Rochester, Saturday, Oct. 10, 3:30 p.m.

George Eastman may be best known as the founder of Eastman Kodak Company, which revolutionized photography by making it broadly accessible, but he was also one of the great philanthropists of his century. As Kodak built the world's leading imaging company, Eastman quietly donated tens of millions of dollars to such institutions as MIT, the Tuskegee Institute, and the University of Rochester. He also founded the University's renowned Eastman School of Music and helped start its School of Medicine and Dentistry.

Now, 77 years after his death, George Eastman's legacy of innovation and philanthropy is being marked at the University of Rochester by the installation on the Eastman Quadrangle of a greater-than-life-size bronze statue created by Marc Mellon, one of the nation's foremost representational sculptors. Mellon most recently created the inaugural medal for President Barack Obama, and his other work includes portrait busts of former President George H. W. Bush and Pope John Paul II, as well as the NBA MVP trophy. Mellon is also a former University of Rochester student.

The statue is a gift from Trustee Laurence Bloch, a 1975 graduate of the University and a trustee since 1998, and his wife, Cindy. Among the Blochs' many previous gifts to the University is the Larry & Cindy Bloch Fitness Center.

Larry Bloch and fellow Trustee and Alumnus Tom Sloan are the national co-chairs of the George Eastman Circle.

"George Eastman's legacythe Eastman School, Eastman Theatre, the School of Medicine and Dentistryplayed a major role in shaping the University of Rochester," said President Joel Seligman. "We are thrilled to honor it in this tangible and highly visible way. Larry and Cindy Bloch have inspired us by their generous tribute to George Eastman and the example he set for all of us."

Eastman gave more than $50 million to the University of Rochester during the first decades of the 20th century. That is fully half of the $100 million he donated to all causes over his lifetime.

His legacy still has influence today. When the University of Rochester established the George Eastman Circle in 2007, it was hoped that as many as 250 donors would sign on by pledging five-year gift commitments ranging from $1,500 annually to $50,000 and more a year. But when the initial Charter Phase closed as scheduled on Dec. 31, 2008, 1,087 Charter members had joined George's circle.

"Eastman was our greatest exemplar of visionary philanthropy and our great hero," said James D. Thompson, senior vice president and chief advancement officer. "This statue is an enduring tribute to his example and the George Eastman Circle created in his honor." Thompson added that the Blochs are themselves Charter Members of the George Eastman Circle, and Mr. Bloch serves as the Circle's National Co-Chair.

Thompson noted that the lasting legacy of the greatest innovators in business is often as much a result of their philanthropy as their commercial success. That was famously true of John D. Rockefeller, Leland Stanford Jr., James B. Duke, and Andrew Mellon. It is equally apparent in the work of Eastman, whose gifts have helped educate, train, and heal hundreds of thousands of students, musicians, researchers, and patients over the last century.

"The stunning success of the George Eastman Circle proves that George Eastman's vision still has great capacity to inspire," Seligman said. "Even in a time of economic uncertainty, more than a thousand of our friends have made longer-term commitments than even during previous periods of much greater economic stability. I am delighted that so many share his vision of shaping the future by their own generosity. I think he would be very proud of what he began, and what we are celebrating here."

Eastman's legacy is also being celebrated this week with the opening of the newly renovated and renamed Kodak Hall at Eastman Theatre, which is used for concerts by both the University's Eastman School of Music and the Rochester Philharmonic Orchestra.

Mellon said that in his work he tries to focus on "the qualities that represent a leader's personal achievements, qualities that have over time become associated not just with the individual, but with his or her contribution to society." In the case of the eight-foot tall, 1,050-pound George Eastman statue, he said that he designed it "to convey Eastman as a man of action, an innovator, a visionary, and one of our nation's greatest philanthropists."

Eastman followed something of an evolution in both his commercial success and his philanthropy. Judged "not especially gifted," he left school at an early age to support his mother but went on to become a giant of the technology industry of the early 20th century. And he changed his opinions about education as well, declaring in 1898 "I am not interested in education," but by 1924 famously stating "The progress of the world depends almost entirely on education."

Note to editors: A high-resolution image of the George Eastman statue will be available Saturday evening, Oct. 10, at www.rochester.edu/news/show.php?id=3463. 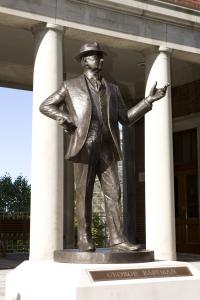 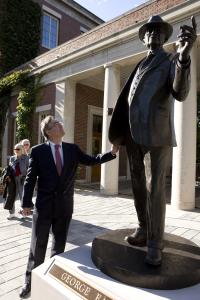 Sculptor Marc Mellon with his statue of George Eastman 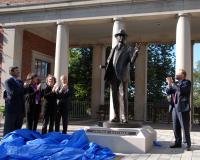