University of Rochester's Esther Conwell, a Pioneering Woman Scientist, to Receive the National Medal of Science

Note to Editors: For more on Esther Conwell see http://www.rochester.edu/news/conwell.html.

A woman once denied a job as an engineer because of her gender will be awarded a National Medal of Science.

Esther M. Conwell, professor of chemistry at the University of Rochester, has been chosen by President Obama to receive the high honor.

Professor Conwell, who has a joint appointment in the University's Department of Physics, helped launch the computer revolution by explaining how electrons travel through semiconductors. Her research earned her membership in both the National Academy of Sciences and the National Academy of Engineering, two of the highest honors a scientist or engineer can receive.

The National Medal of Science was established by Congress in 1959 and is awarded by the President to recognize "outstanding contributions to knowledge" in the sciences.

"Esther Conwell's career in science is a triumph built on decades of important scientific contributions in academia and in private laboratories," said University President Joel Seligman. "She persevered in a world that often was not supportive of women and their aspirations. For her scientific contributions and her pioneering role as a leading woman in science, she is a source of pride for our entire University of Rochester community."

Conwell earned her master's degree in physics at the University of Rochester in 1945 under the guidance of Victor Weisskopf. The Conwell-Weisskopf theory they developed described how "impurity ions" impede the flow of electrons and led to a better understanding of the materials used in making transistors and integrated circuits.

Conwell was nominated for the National Medal of Science by Mildred Dresselhaus, Professor of Physics and Electrical Engineering at the Massachusetts Institute of Technologyherself a Medal of Science winner. "Dr. Esther Conwell has had an extraordinarily productive career as a scientist and has greatly influenced electronic device design and performance" wrote Dresselhaus in her letter of nomination. "She has an outstanding track record and is still going strong."

"Esther was right there at a very exciting time in semiconductor research," Dresselhaus told the Rochester Review in 2003. "Her work is the basis, the very fundamentals, of what we study today."

Conwell started teaching at the University of Rochester as an adjunct professor in 1990, then became a full-time professor of chemistry in 1998 after retiring from Xerox.

"Esther Conwell's breakthrough scientific work on electron transport in semiconductors is still important scientifically and technologically more than a half-century after her initial work," said University Provost Ralph Kuncl. "Her scientific achievements are further amplified by her commitment to encouraging future women scientists and mentoring the next generation of scientific leaders. We are indebted to her for her crucial contributions to our nation's scientific development, and delighted to call her a colleague."

Her academic and professional careers began at a time when women were rarely seen in science classrooms and laboratories. Early in her career, Conwell was hired as an assistant engineer at Western Electric. Shortly afterwards, she was notified that no such classification existed for women, so Conwell became an engineer's assistant, a reassignment that significantly lowered her pay.

"My life is the story of women scientists making a place in the world," Conwell told the Review. "Although it's not nirvana yet, women have come a long way in my working lifetime, and it gives me hope."

Discover magazine in 2002 named Esther Conwell one of the 50 all-time most important women in science.

"Esther's 70 year long and still active career has greatly contributed to the technological revolution," said Robert K. Boeckman, Jr., chairman of the University's department of chemistry. "Her theoretical models contributed greatly to our understanding of electron transport and charge redistribution in solids, which directly led to the practical devices we use every day.

A committee of 12 scientists and engineers, appointed by the President, nominates individuals for the National Medal of Science. The final decisions are made by the President.

Conwell's honor represents the first Medal of Science award for a University of Rochester faculty member.

Conwell received her B.A. from Brooklyn College in 1942 and Ph.D. from the University of Chicago in 1948.

Conwell has written one book, more than 200 technical publications, and holds four patents.

At the age of 88, she maintains a daily presence in the chemistry department, where she is currently studying the movement of electrons through DNA.

More on “University of Rochester's Esther Conwell, a Pioneering Woman Scientist, to Receive the National Medal of Science”

National Science Foundation
Esther Conwell heard early in her career that women could not be engineers.
(November 24, 2010) 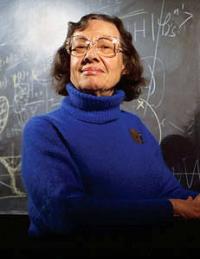