"Nat Wisch has lived the ideals of the University of Rochester as a student, a professional, and a trustee," said University President Joel Seligman. "His generous gift is a sign of his commitment to those ideals, and it will significantly help us to better meet the needs of our students for many generations to come."

Dr. Wisch said he and his wife created the Nathaniel and Helen Wisch Professorship in Biology to help Rochester attract and retain the very best researchers and educatorsscholars who will both advance the field of biology and inspire their students. "Top-rated faculty go where they can get named professorships," said Dr. Wisch.

Professor John (Jack) Werren has been named the first recipient of the professorship. Werren is a leading expert in evolutionary genetics. His research combines genetic, molecular, and population studies to investigate diverse topics in biology. His studies on the genetic basis of shape and size differences between closely-related insect species have uncovered mechanisms of growth regulation, which may eventually lead to a better understanding of diseases that involve inappropriate growth, such as cancer. Werren's research comparing genomes revealed that some animals routinely acquire genes from their bacterial associatesa mechanism that may be important for the evolution of genetic novelty in animals, and which may lead to new genetic targets for pest control. Werren also recently received an NIH grant to explore the venoms of parasitic wasps as a possible resource for new drug discovery.

"Professorships are a wonderful way to acknowledge the excellence of the contributions of our faculty," said Joanna Olmsted, Dean of the School of Arts and Sciences. "We are delighted that Dr. and Mrs. Wisch chose to designate the professorship they created to the Department of Biology, which has strong research programs and teaches a large number of students, many of whom major in biology. The first incumbent of this professorship, Professor John Werren, is an outstanding example of this commitment to research and education."

Werren teaches courses in genetic research and in animal behavior. His contributions to educational outreach include teaching workshops for high school and college instructors, and developing a discovery-oriented laboratory curriculum that is now widely used.

"Jack has an international reputation that enhances the standing of the entire department," said Gloria Culver, chair of the Department of Biology. "His work extends from fundamental biology to ramifications in human health."

Dr. Wisch enrolled at the University in 1951 planning to study physics, but had a change of heart shortly after. "I'm a 'people person' and didn't want to get stuck in a lab," said Wisch, "so I decided on biology, with the intention of going on to medical school."

It was a decision he never regretted. Dr. Wisch said his professors, whom he describes as "spectacular," taught him that there was nothing he couldn't accomplish. He learned that lesson well, graduating with distinction, attending medical school at Northwestern University, and going on to practice medicine as an oncologist and hematologist in Manhattan. He is also on the faculty of the Mt. Sinai School of Medicine, where he is a clinical professor of medicine. But Dr. Wisch never forgot Rochester, frequently coming back for reunions, Parents Council, and Trustees' Council of the College meetings and serving as a trustee, a position that he currently holds.

He was reminded of his high regard for the faculty following a visit to the biology department several years ago. After Dr. Wisch noticed the name of a former professor, William Muchmore, on the directory, the department chair offered to arrange a meeting for the next time he came to campus. During the later visit, he was surprised when Professor Muchmore took out a little notebook filled with handwritten notes on student grades, dissections, and other course activities that he had used when Dr. Wisch was a student.

"He described what I did right and what I could have done better," said Dr. Wisch. "It was a sign he truly cared about his students."

The University is important not only to Nat Wisch; it means a great deal to his wife, Helen, as well. Dr. Wisch, who met his future wife after his freshman year while she was attending Oswego State Teachers College, said that part of their courtship occurred at the University of Rochester.

Werren has earned numerous honors, including the NIH EUREKA (Exceptional, Unconventional Research Enabling Knowledge Acceleration) Grant Award, Smithsonian Senior Fellow Award, and the Humboldt Prize from the Alexander von Humboldt Foundation in Germany. He is also a Fellow of the American Society for the Advancement of Science. 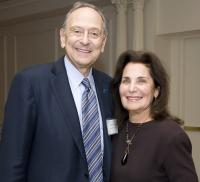