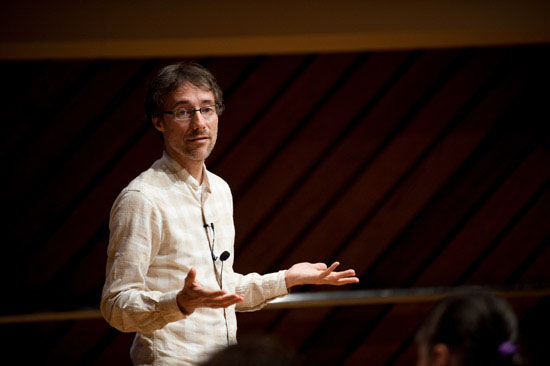 'The M.K. Gandhi Institute for Nonviolence at the University of Rochester hosts restorative justice practitioner Dominic Barter of Brazil during a 2-day presentation in Wilson Commons' May Room September 12, 2010.'

Restorative circles pioneer Dominic Barter returns to Rochester this week to share how social justice techniques can be used in the city's schools, courts, and communities. During his only trip to North America in 2012, the internationally recognized expert will lead discussions and training sessions over the course of the week to show how restorative initiatives can bring healing and reduce violence in Rochester.

Restorative Justice is an alternative to the judicial system that is proving successful around the world in keeping youth offenders out of jail and reducing recidivism. A partner process, Restorative Circles, is a community-based system that supports those involved in conflict by bringing together the parties involved and creating conditions for mutually beneficial action. Barter developed Restorative Circles in the favelas of Brazil in the 1990s and the process has been applied on the community level in 22 countries and has been used as a part of award-winning government projects in justice and educational and social services.

"We are excited to bring Dominic back to Rochester after his first trip here in 2010 for Restorative Rochester Week," says Kit Miller, director of the M.K. Gandhi Institute for Nonviolence at the University of Rochester, a primary sponsor of Barter's visit. "Dominic is a social entrepreneur who really gets people thinking differently about conflict and how to deal with it in a way that won't inflict more harm on the people involved."

In Rochester, restorative initiatives have begun to be adopted in schools, courts, and communities. At the collegiate level, the University of Rochester's Center for Student Conflict Management works with administrators to make alternative dispute resolutions like restorative circles part of the campus culture and the approach has been used in a variety of situations, from disagreements among roommates to disputes between teammates on an athletic team. Members of the University's security staff also underwent training in restorative practices this past February.  In the Rochester City School District, both Monroe and Wilson Magnet high schools are among a number of buildings to employ restorative processes to resolve issues. In the courts, Partners in Restorative Initiatives works with the Monroe County district attorney's office to identify appropriate uses of restorative justice processes in city and town court cases.

The week-long series of events is designed to enhance and expand the work already underway in Rochester. The events are sponsored by the Gandhi Institute, the American Baptist Churches of the Rochester/Genesee Region, the Center for Dispute Settlement, Partners in Restorative Initiatives, and the University of Rochester Dean of Students Office. The following events are a part of the Restorative Circles schedule:

Dominic Barter will discuss two decades of research on the role of conflict and the interface between societal and personal change. He also will share his experiences as a consultant and training program director for the Brazilian Restorative Justice pilot projects, in collaboration with the United Nations Development Program, UNESCO, the Ministry of Justice, Ministry of Education and Special Secretariat for Human Rights.

Dominic Barter will present the key elements of a restorative system, focusing on the evolution and practice of Restorative Circles, and their application to diverse areas of our personal and collective lives. Through hands-on exploration of key concepts, grounded in a step-by-step process and illustrated by real work examples, attendees will rehearse the development of this new resource.

The Restorative Circle Facilitation and System Practice will create the conditions for focused exploration, peer support, and group practice in the dynamics of Restorative Circles. Dominic Barter, together with Sissi Mazzetti, Karl Steyaert, and Duke Duchscherer, will lead four days of learning designed to deepen the craft of facilitation in Restorative Circles and one's practical understanding of the systemic contexts that support them.

For more information about the events, e-mail Melissa Greco Lopes at mgrecolo@ur.rochester.edu or call 585.260.6666.