Quantum Optics Leaders from Around the World Convene in Rochester 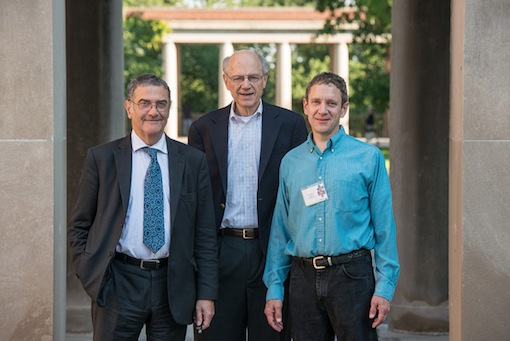 'Serge Haroche, Joe Eberly and Nick Bigelow outside Hoyt Auditorium before the start of the conference. Photo by J. Adam Fenster/University of Rochester'

Two hundred physics and optics researchers from 20 countries worldwide have come together at the University of Rochester this week for the Tenth Rochester Conference on Coherence and Quantum Optics.

The University has hosted this meeting every six years since 1960. The conference was first organized by Emil Wolf, the Wilson Professor of Optical Physics at the University and one of the most cited physics authors.

Nick Bigelow, chairman of the Department of Physics at the University, welcomed the attendees to Rochester in his opening remarks before introducing Fred Cummings, the first speaker of Monday's plenary. The Monday session paid homage to the 50th anniversary of the Jaynes-Cummings model, a theoretical model in quantum optics that describes the fundamental interaction of a two-level atom with a quantized mode of an optical cavity. This model is a key part of understanding laser physics, for example. In his talk, Cummings looked back at his work of half a century ago, which led to the model named after him and his Ph.D. supervisor Ed Jaynes. 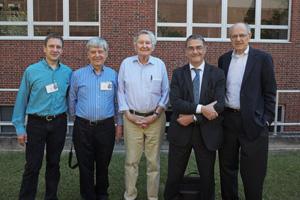 Serge Haroche, 2012 Nobel Prize-winning physicist, spoke next about the links between this model and his work on cavity quantum electrodynamics, the area for which he received the Nobel Prize last October. Joe Eberly and Carlos Stroud, both professors at the University of Rochester, offered further historical perspective on this work. Stroud and Eberly, like Cummings, did their Ph.D.s under Ed Jaynes, and have worked in the field for many years.

Throughout the week, dozens of leaders in theoretical and experimental coherence and quantum optics will give talks capturing the developments of the field. Some of the plenary speakers include Anton Zeilinger and Alain Aspect, whose names regularly come up when discussing potential future Nobel winners; Paul Kwiat of the University of Illinois, one of the pioneers of quantum information theory; Jonathan Dowling, from Lousiana State University, who reportedly got the field of quantum computing going in a bar in San Francisco; Michal Lipson from Cornell University, who is essentially building computer circuits on chips that use light instead of electrons; and Alex Gaeta, also a professor at Cornell, who recently developed cloaking in time instead of space. Gaeta is also an alumnus of the University and as an undergraduate major here was also a first-team All American in singles tennis.

For more information about the conference, please visit this website.