Growing up, if you had asked Madeleine (Maddie) Graham ’18 whether she wanted to follow in the footsteps of her father, Tony (class of 1981) and older brother, Duncan (class of 2015) when selecting a college, she would have said “No way.” But, as the forces of fate and family aligned, she fell in love with the University of Rochester after just one visit. 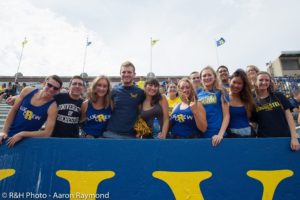 Go ‘Jackets! Maddie (third from the left) showed her Rochester pride as part (and president) of BlueCrew.

As a student, Maddie took full advantage of everything the University had to offer, including close proximity to the Eastman School of Music; she served as a four-year member of the Woman’s Chorus. Maddie also showed her school spirit as part of “BlueCrew,” a student-run organization that promoted enthusiasm and excitement at athletic events. Elected president of the club in her sophomore year, she cheered on the Yellowjackets in a role that helped her gain leadership and management skills. Academically, the open curriculum was influential to Maddie’s overall experience, and she counts English professor David Bleich among the outstanding faculty that made a lasting impact and helped her develop critical thinking skills. “I consider myself very lucky for all the things I was able to do and experience as I pursued my passions at the University of Rochester,” Maddie recalls.

Feeling prepared to take on the world in New York City after graduating in the spring of 2018, she was ready to expand her horizons after a brief stint with a very small marketing agency. However, to Maddie’s dismay, her previously proven networking tools were falling flat. Even with a paid account on LinkedIn, she was facing dead-end connections and feeling stuck.

She needed something different: to make meaningful connections within a community she already knew and loved. She needed The Meliora Collective. 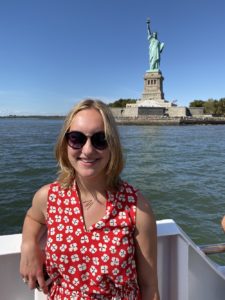 Maddie’s father, Tony, is a member of the Alumni Board and Metro New York City Network Leadership Cabinet. He introduced her to the University of Rochester’s platform for professional exploration before it even officially launched in March 2018, and she noticed an immediate difference from other tools. Not only was every graduate she contacted willing to speak with her, she consistently had fulfilling conversations. Discussions revolved around alumni sharing valuable insights on their own career journeys, and advice on how to be successful doing something you love.

Inspired, Maddie used The Collective’s search feature to enter the name of her dream company––global media megastar Condé Nast. While she didn’t expect to find many alumni who worked there, one person, executive account director Kathryn Nave ’06, appeared to her surprise and delight.

Kathryn responded to Maddie’s first message right away, and things progressed quickly from there. Kathryn provided both a list of open positions at the company and her expertise on the ones Maddie was the best fit for. Maddie then got a call from Condé Nast, interviewed the next week, and received a job offer shortly thereafter.

Fast forward to today––now a sales planner for the style division, Maddie and Kathryn are colleagues. The two met face-to-face for the first time at The Rochester Effect event in New York City, and discovered they worked on the same floor. Both active alumnae, the two women often run into each other at other University events in the Metro New York City area.

Maddie believes wholeheartedly in the importance of leveraging the entire University of Rochester community. She’s a newly-minted member of the George Eastman Circle and plans to pay her good fortunate forward by serving as a resource and advocate on The Meliora Collective, sharing her experiences to help others and encouraging her friends to join. As a recent graduate, she knows firsthand what it’s like to face the uncertainty that can come with leaving the campus she fell in love with on that first visit as a prospective student.

“The University is a truly special place, with such intelligent and interesting people. What defines Rochester is how curious everyone is, with an authentic love of learning–something you don’t always find in the ‘real world.’”

Her best advice? Embrace that inner nerd, and maybe listen to your parents.

The Meliora Collective is just getting started. Join to connect with more than 7,000 members, and use groups to find others with shared interests and experiences. For more information on career resources, click here.