Dave Ocorr ’51 has been an athlete, pro-baseball player, author, journalist, university leader, and more. As a Rochester student, he lettered in three sports and was captain of the baseball team. He was also president of Delta Kappa Epsilon, editor for the yearbook, and a sports editor for the Campus Times.

After graduation, Ocorr served in the Navy for four years during the Korean conflict, after which he pursued a career in journalism and, ultimately, in athletics, as a coach and an administrator who led important programs for the University—including overseeing major renovations to its sports facilities and Title IX compliance programming, such as bringing in women’s lacrosse, soccer, and track and field to Rochester. Ocorr is also a member of the University of Rochester’s Athletic Hall of Fame.

Rochester Athletics has begun an effort to name the Boehning Varsity House’s baseball locker room after Ocorr. Here, the legendary coach reflects on his life and career. For more information and to support this locker room naming fund, contact Terry Gurnett, associate director of Rochester Athletics.

In 1929, the Depression came to the country. It’s also the year I was born. We lived in a lot of places when my younger brother and I were growing up, including above a stable at my grandparent’s house in Pittsford. When I was a kid, I worked paper routes and I sold magazines and asparagus door-to-door. Eating out was a hamburg and milkshake at McConnell’s Dairy in Pittsford, which cost 25 cents.

My father, Robert, loved the University of Rochester and was a student back when the campus was on Prince Street. He played football for Coach Tom Davies in 1927. It wasn’t an easy time for anyone back then and he could only afford two years here. He remained a dedicated alumnus and fan though. In 1937, he took me to campus to watch Gerry Zornow ’37 pitch for the YellowJackets. [Later, Zornow would become Kodak’s president and chair of the University’s Board of Trustees.]

Because of my father’s passion for the University, I knew I’d go to college here. I played three sports—baseball, basketball, and football—which is something young people just can’t do today.

During my sophomore year, Rochester still had Navy barracks on campus. That’s where I lived. My room was a very small cubicle, with just enough space for a desk and a bunk bed. The barracks were a holdover from the V-12 Navy College Training Program, which brought more men to campus at a time when so many had left for the war. Because of this program, men could get their naval orientation and train to serve as commissioned officers while they were here. Many of them came back after their service to earn their degrees.

I majored in English and minored in history. I took classes with some of Rochester’s legendary professors, too, including Kathrine Kohler from the English department and Dexter Perkins and Arthur May from the history department. Lou Alexander, the athletics director (AD) at the time, was my mentor. Later, when I was a coach and the sports information director, we named the named the palestra after him—the Louis A. Alexander Palestra (thanks to assistance from University administrator Harm Potter ’38). 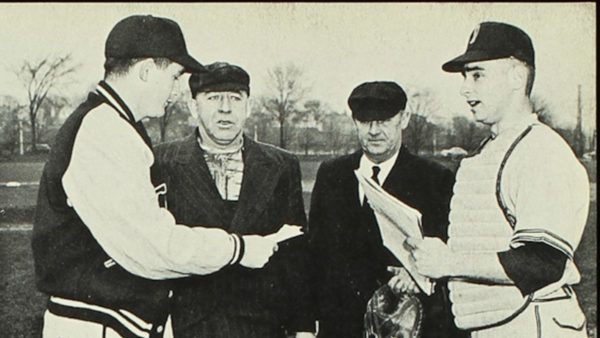 After watching Zornow pitch when I was eight years old, I was hooked on baseball. At Rochester, I played a little second base, but mostly I was a catcher. I loved it—you’re in on every play. I did pretty well at bat, too, and led the team in hitting one year. For four years, I played in every inning, and that’s something I’m very proud of.

Baseball was my favorite sport—it just gets into your blood. I remember one game at Hamilton. I was catching and chased a pop fly right into the wooden scoreboard, which I ended up crashing through and breaking. Years later, as a coach for Rochester, I brought the baseball team there. The scoreboard was still wounded, with just a board nailed over the hole. The same coach was there from that initial game. He chided me and said, “I should’ve sent you a bill.”

I played basketball, too, and two years of football. I only stopped football because I had an opportunity to work as a stringer for the Democrat & Chronicle.

The Korean conflict was on, so after college I enlisted in the Navy. I served until 1955 as a communications officer on the Battleship Missouri and as a gunnery officer aboard the Battleship Wisconsin during which I sailed with the Seventh Fleet, off Korea. I was actually released from duty three months early so I could get to spring training with the Miami Sun Sox, a professional team in the Florida International League. But, my pro ball career was cut short. Just when I got out of the Navy, the Florida league folded. I was transferred to Texas City, Texas, but I decided to join the University of Rochester as an assistant varsity coach.

In 1955, I went to New York City to get a master’s degree from the Columbia University Graduate School of Journalism. I then came back to Rochester to work for the Times Union and I coached part-time at the University. Some memories really standout during that time. Like a baseball game against Syracuse when Dick Rice ’65 stole home and we beat the Orange at Syracuse. This was big. Wins over Princeton, William and Mary, and Colgate (two) were big, too.

I eventually coached fulltime for the baseball, football, and basketball teams here. For six years, I set up a “Fauver-like” intercollegiate athletics program at the University of Scranton. To summarize my coaching career, I would echo Lou Alexander who often confessed, “If I were a rich man, I’d pay the University to coach here.”

I later came back to the University of Rochester as the athletics director, a position I held from 1974-1981. During that time, the department completed a major facilities renovation—the first since Fauver’s 1930 master plan. We created the Zornow Center and updated Fauver Stadium. As director, I guided the University toward Title IX compliance.

I left the University because a business partner and I were going to buy a minor league baseball team. Although that deal fell through, other doors opened. I would end up finishing my career as a vice president and assistant to the president at St. John Fisher.

When I first retired 30 years ago, I wrote three sports novels geared for teenagers: Frosh Phenom, Baseball Battery, and Backcourt Duo. Most of the characters are based on coaches and players I’ve known. The main characters are named after two of my grandsons, Matt and Shawn.

Teamwork is everything. You have to be committed to working toward a common goal. That’s the biggest thing, on the field and in life. And, you have to work hard. You have to be willing to pay the price to get the desired result.

My wife, June, and I have been married for 68 years. We met at a Royals basketball game—that was when the city of Rochester had a pro NBA team. We have four children and 10 grandkids. Most of the year we live on the lake in Canandaigua, in a 1938 cottage that we’ve fixed up over the years. We spend a few of the winter months in Florida, too, where we get to look at the Gulf of Mexico and walk its beaches.