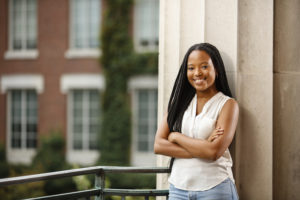 On January 12, 2010, a 7.0 magnitude earthquake hit Haiti. Raina Plaisir ’25, just seven years old, was in her family’s kitchen in Port-au-Prince. She doesn’t remember much but does recall hiding under the table and calling out to her father.

Soon after, Plaisir, her parents, and younger brother, Ryann, went to Haiti’s countryside to live with her grandparents. For the next few months, they gathered the necessary documentation to immigrate to the U.S. The family then found themselves in New York City where Plaisir’s aunt lived. They stayed there until they had some footing of their own. Plaisir’s father stayed in Haiti, hoping to collect pieces of their life and reunite with them as soon as possible.

“It was hard coming to the U.S., especially because none of us could speak the language here,” says Raina, whose native language is French. “I learned English, mostly, by watching TV and looking through books.”

Although the transition was difficult for her, Plaisir recognizes the incredible weight her mother carried—and how hard she worked to help Plaisir and her brother assimilate to their new environment, all while she struggled, too. “My mother signed us up for everything from free afterschool programs to extracurricular activities,” she says. “At the time, my mom was learning the language, too, looking for work, and rising above so many challenges. She’s such an inspiration to me.”

“Being a Women’s Network Scholar means that I’m gifted the opportunity to do incredible things, to turn my dreams into realities, and to forge my own path.``

Today, Plaisir is a first-generation student at the University of Rochester. Right now, she’s planning to go to medical school and, perhaps someday, become a neuroscientist. She also loves theater. Her love of science and the arts brought her to the University, a place where she knew she could thrive.

Plaisir wasn’t always as outgoing as she is now. A middle school drama teacher noticed how shy she was and encouraged her to try out for the school play. “She convinced me to do something that I never thought I could do,” she adds. “I loved it and the way I felt after that performance. I ended up being in every middle school production.”

In eighth grade, that same teacher suggested to Raina that she apply to LaGuardia High School, the performing arts school featured in the 1980’s TV show, Fame. Going there was the best decision for Plaisir, and it cemented her passion for performance. Her favorite roles were as Blanche in The Streetcar Named Desire and as Elmire in Tartuffe, by Molière, a French playwright and contemporary of Shakespeare’s.

In the spring of her senior year in high school, Plaisir signed on with an agent. Since then—even from her University dorm room, she’s been memorizing lines and sending in video auditions for a variety of roles, from an HBO special to a Netflix production to a New York City Theater Workshop program. Soon, she’ll audition for winter and spring productions presented by the International Theatre Program.

Soon after arriving on campus, Plaisir joined the French club.  She also joined MAPS (Minority Association of Pre-Medical Students), which serves minority groups that are underrepresented in the medical field. Plaisir also recently attended a “Her Campus” general interest meeting, too, a club that focuses on issues and opportunities for women.

When she’s not studying, involved in a group activities, or performing or auditioning, Plaisir passes the time with friends at the Pit in Wilson Commons, among the books in Rush Rhees’ Stacks, and writing reviews of her favorite articles, movies, and books.

“I like to read articles in magazines and newspapers and then I write my response to each one,” she says. “For instance, I did that with an Atlantic article entitled ‘How America Fractured in Four Parts.’ I related it to what I’ve learned about how U.S. politics has changed since 9-11. I also recently wrote pieces based on the novel, The Lovely Bones, by Alice Sebold, and the movie, Get Out, by Jordan Peele. I just do this for myself because I think it’s fun.”

Plaisir recalls one of her best days at college so far. “A few weeks ago, my friends and I went to Tai Chi Bubble Tea in College Town,” she says. “We ordered our food and drinks, and all sat down and then, rather frantically and almost in unison, got out our various assignments and just started diving into them. I looked around at each one of us and thought ‘here we are, all independent young women, taking on life together.’ It was an eye-opening moment for me, one I really enjoyed.”

College wouldn’t be possible for Plaisir without financial aid, which includes being a recipient of the Women’s Network Scholarship. “Being a Women’s Network Scholar means that I’m gifted the opportunity to do incredible things, to turn my dreams into realities, and to forge my own path,” she adds. “The women behind this scholarship forged theirs and I am so grateful—I want to learn from them all, hear their stories, and know their secrets to success.”