University of Rochester to Receive Congressional Collection of the Honorable Louise M. Slaughter 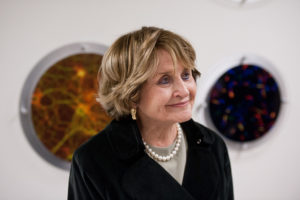 Slaughter served with distinction as the U.S. representative from the Rochester region from 1987 until her death in 2018. During her 16 terms, she was the only microbiologist in Congress and the first chairwoman of the Rules Committee. Known as a progressive Democrat, Slaughter was highly regarded as a champion for women’s rights, higher education, the arts and humanities, federally-funded research, economic development, and health care accessibility. At the time of her death, she was dean of New York’s congressional delegation.

“Rochester was the heart of Louise’s district and she tirelessly represented the people here,” says University of Rochester President Richard Feldman. “Her legacy in Congress, throughout the state, in Rochester, and across this University was profound and will never be forgotten—it is a distinctive honor for the University to curate and steward her collection. I want to thank the Slaughter family for entrusting us with this wonderful opportunity.”

“Serving as a member of the United States House of Representatives was the highest privilege and honor of our mother’s life, and we are delighted that the University of Rochester will be the steward for the official records, documents, and memorabilia associated with her entire Congressional career,” says Robin Slaughter Minerva, on behalf of the family.

“The results of her leadership will long remain evident in Rochester, and viewing the breadth of this collection will give students, faculty, and the public a sense of the enormous scope of our mother’s accomplishments,” adds Slaughter Minerva. “This is not just about housing papers and historical records, but it’s about preparing and inspiring those who will be our leaders in the years to come by offering an insider’s view of history—of Rochester, of New York and of the United States,” adds Slaughter Minerva. 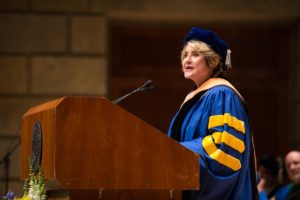 Congresswoman Louise Slaughter delivers the School of Medicine and Dentistry Commencement address at Eastman Theatre, May 2014

The collection will document Slaughter’s leadership and steadfast work for the public good, including her sponsorship of landmark legislation and dedication to her constituents. The papers include legislative research, introduced and passed bills, speeches, manuscripts, awards, and visual media documenting years of committed service.

The collection will also serve as an important tool for scholars, students, and the community. It will help them gain a greater understanding of her leadership and cultural movements that took place during Slaughter’s 30-year Congressional tenure. 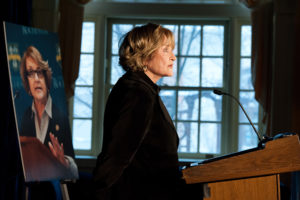 “Congresswoman Slaughter’s papers will offer nearly endless opportunities for research, teaching, collaboration, community engagement, and service learning,” adds Jessica Lacher-Feldman, exhibits and special projects director in the Department of Rare Books and Special Collections, who notes that next steps include hiring a project archivist to process the collection and prepare it for public access and use.

The University anticipates creating the following from the collection:

Throughout her Congressional tenure, Slaughter was an enthusiastic supporter of the University of Rochester. In acknowledgment of her efforts and leadership, the University presented her its prestigious Presidential Proclamation in 2014 and Eastman Medal in 2009. That same year, Slaughter delivered the undergraduate Commencement Address. In March 2019, Slaughter was named to the National Women’s Hall of Fame in Seneca Falls and will be formally inducted on Saturday, September 14.

Visit the University’s NewsCenter for more on this story.