Alan Stockman, the Marie C. and Joseph C. Wilson Professor of Economics at the University of Rochester, died January 14 after a long battle with cancer. He was 58.

A talented teacher, inspiring mentor, and respected scholar, Professor Stockman made major contributions to the fields of international finance and macroeconomics, publishing seminal papers on exchange rates and international business cycles. He is remembered by colleagues as a man whose infectious enthusiasm for economics was characteristic of his general approach to life.

"He had a passion for ideas and a childlike pleasure in all things," said Steven Landsburg, professor of economics at the University, who was a close friend of Professor Stockman since their days as doctoral candidates at the University of Chicago. "He had a sparkling, bubbling enthusiasm" that came through whether he was discussing economic theory, playing a guitar, or participating in one of the department's musical skits, Landsburg recalled.

"He was willing to talk to colleagues anytime and anyplace, whether it be about economics or anything else. He had a wonderful clarity of thought and an ability to analyze problems," adds Michael Wolkoff, deputy chair of the Department of Economics. "He was a very warm, generous person. He truly had many friends in the department and the profession."

Professor Stockman joined the department in 1979 following a postdoctoral fellowship at the University of California, Los Angeles. He earned his bachelor's degree at Ohio State University. Throughout his tenure at the University, Stockman taught the economic principles class, a course for which he authored a popular textbook, The Principles of Economics (Harcourt Brace College Publishers). From 1994 to 1995, he served on the College Curriculum Committee, a group that in 1997 received the University's first Goergen Award for Distinguished Contributions to Undergraduate Learning. In recognition of his decades of engaging and challenging students, he was awarded the University Award for Lifetime Achievement in Graduate Education in 2006.

"I think you always model oneself after the professor who had the most intellectual impact on you during your graduate education. Alan was that person for me," said Harold Cole '86 (PhD), one of Stockman's former dissertation advisees and now a professor of economics at the University of Pennsylvania, when Stockman received the lifetime achievement award. "He had a combination of intuition and technical ability that made economics come easy for him. He could do theoretical work, applied work, or quantitative work. He could work in macro, international, theory, or even economic methodology. His enthusiasm and breadth of knowledge and investigative skills were inspiring,"

In addition to teaching, Professor Stockman held several leadership positions, including chair of the economics department from 1993 to 2000 and from 2003 to 2006. Professor Stockman was also a long-term research associate of the National Bureau of Economic Research, a visiting professor at the Institut Universitaire de Hautes Etudes Internationales, Geneva, Switzerland, and a visiting scholar at the Institute for International Economic Studies, Stockholm, Sweden.

During his career, he published more than 60 academic papers. Among his most cited works are "Tastes and Technology in a Two-Country Model of the Business Cycle: Explaining International Comovements" (with Linda Tesar) in the American Economic Review and "A Theory of Exchange Rate Determination" in the Journal of Political Economy.

In his honor, the Department of Economics' annual graduate research conference will be renamed The Stockman Conference.

Professor Stockman, who lived in Pittsford, is survived by his wife, Ellen, three daughters, his parents, a brother and a sister. There will be a memorial service at the University of Rochester Interfaith Chapel with a reception immediately following at the Eisenberg Rotunda in Schlegel Hall to honor the memory of Alan Stockman on Thursday evening, April 15 starting at 7:30 p.m.

The University flag will be flown at half-staff in Professor Stockman's honor on Monday, January 18. 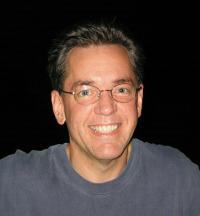 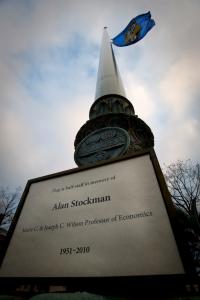 The University flag was flown at half-staff in Professor Stockmans honor on Monday, January 18.