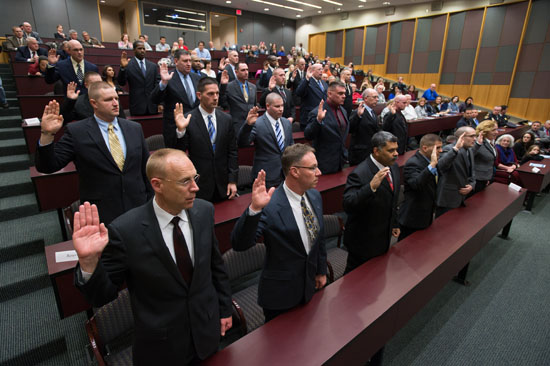 At a March 28 ceremony, 25 members of the University's Department of Security Services were sworn in as the first group of peace officers. The officers will now begin a five-month peace officer academy program for training and certification.

New York State Governor Andrew Cuomo signed legislation, sponsored by Senator Jim Alesi and Assemblyman Harry Bronson, on Dec. 17, 2012 allowing for this expanded authority at the University. The peace officers will undergo 368 hours of academy program training, in addition to their previous Security training. Currently, new University Security officers receive 480 hours of basic training. It is expected that in the fall 2013 semester, Security Services will have its first mixed force of sworn peace officers and regular security officers.

On University property, peace officers will be able to make arrests due to the commission of a felony, misdemeanor, or other breach of peace based on probable cause, and can make mental health arrestsan authority that allows peace officers to intervene promptly in mental health emergencies to facilitate quick transport. They will be able to conduct proper warrantless searches and have the power to take safe custody of firearms. They will also have access to the governmental criminal information systems in conducting their investigations.

University peace officers will carry batons and pepper foam as defensive weapons when dealing with potentially dangerous situations. They will not carry firearms or tasers.

"Thanks to Governor Cuomo, Senator Alesi, Assemblyman Bronson, and the other members of our state delegation, the addition of peace officer status to the University force will enhance our incident prevention and response capabilities," said Ron Paprocki, senior vice president for administration and finance and CFO. "The well-being of our employees, students, visitors, and security personnel is our priority, and we want to ensure that we are maximizing our ability to maintain the safest environment possible."

"The peace officers will continue to perform their duties as part of our overall force, but they will have new abilities and tools to add to our investigative and enforcement services within the University community," says Walter Mauldin, director of Security Services. "And the peace officer training provides an additional career development opportunity for our staff."

In December 2010, University President Joel Seligman directed the formation of the Security Commission, which conducted a comprehensive assessment of the University's safety efforts in consultation with the Security Services, local law enforcement, and the University community. Chaired by Paprocki, the commission found that while there had not been a significant increase in the number or severity of crimes on campus, there had been an increase in the number of calls for service by Security in which there has been a greater potential for confrontation.

After several months of review and discussion, the Security Commission released several recommendations to President Seligman, including seeking peace officer status for a portion of the Security staff.