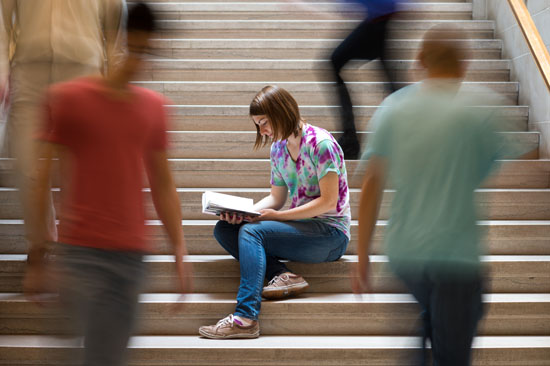 
IQ Predicted by the Brain's Ability to Filter Visual Motion

A brief visual task can predict IQ, according to a new study.

This surprisingly simple exercise measures the brain's unconscious ability to filter out visual movement. The study shows that individuals whose brains are better at automatically suppressing background motion perform better on standard measures of intelligence.

The test is the first purely sensory assessment to be strongly correlated with IQ and may provide a non-verbal and culturally unbiased tool for scientists seeking to understand neural processes associated with general intelligence.

"Because intelligence is such a broad construct, you can't really track it back to one part of the brain," says Duje Tadin, a senior author on the study and an assistant professor of brain and cognitive sciences at the University of Rochester. "But since this task is so simple and so closely linked to IQ, it may give us clues about what makes a brain more efficient, and, consequently, more intelligent."

The unexpected link between IQ and motion filtering was reported online in the Cell Press journal Current Biology on May 23 by a research team lead by Tadin and Michael Melnick, a doctoral candidate in brain and cognitive sciences at the University of Rochester.

In the study, individuals watched brief video clips of black and white bars moving across a computer screen. Their sole task was to identify which direction the bars drifted: to the right or to the left. The bars were presented in three sizes, with the smallest version restricted to the central circle where human motion perception is known to be optimal, an area roughly the width of the thumb when the hand is extended. Participants also took a standardized intelligence test.

As expected, people with higher IQ scores were faster at catching the movement of the bars when observing the smallest image. The results support prior research showing that individuals with higher IQs make simple perceptual judgments swifter and have faster reflexes. "Being 'quick witted' and 'quick on the draw' generally go hand in hand," says Melnick.

But the tables turned when presented with the larger images. The higher a person's IQ, the slower they were at detecting movement. "From previous research, we expected that all participants would be worse at detecting the movement of large images, but high IQ individuals were much, much worse," says Melnick. That counter-intuitive inability to perceive large moving images is a perceptual marker for the brain's ability to suppress background motion, the authors explain. In most scenarios, background movement is less important than small moving objects in the foreground. Think about driving in a car, walking down a hall, or even just moving your eyes across the room. The background is constantly in motion. 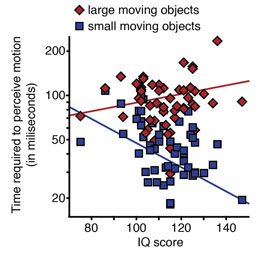 People with higher IQ are quicker at detecting small moving objects, but slower when the objects are larger. This counterintuitive inability to perceive large moving objects is a perceptual marker for the brain's ability to filter out distracting background movement.

The key discovery in this study is how closely this natural filtering ability is linked to IQ. The first experiment found a 64 percent correlation between motion suppression and IQ scores, a much stronger relationship than other sensory measures to date. For example, research on the relationship between intelligence and color discrimination, sensitivity to pitch, and reaction times have found only a 20 to 40 percent correlation. "In our first experiment, the effect for motion was so strong," recalls Tadin, "that I really thought this was a fluke."

So the group tried to disprove the findings from the initial 12-participant study conducted while Tadin was at Vanderbilt University working with co-author Sohee Park, a professor of psychology. They reran the experiment at the University of Rochester on a new cohort of 53 subjects, administering the full IQ test instead of an abbreviated version and the results were even stronger; correlation rose to 71 percent. The authors also tested for other possible explanations for their findings.

For example, did the surprising link to IQ simply reflect a person's willful decision to focus on small moving images? To rule out the effect of attention, the second round of experiments randomly ordered the different image sizes and tested other types of large images that have been shown not to elicit suppression. High IQ individuals continued to be quicker on all tasks, except the ones that isolated motion suppression. The authors concluded that high IQ is associated with automatic filtering of background motion. 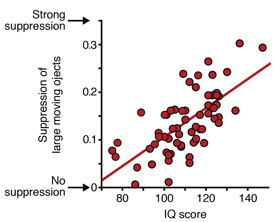 As a person's IQ increases, so too does his or her ability to filter out distracting background motion. This surprisingly strong relationship may help scientists better understand what makes a brain more efficient, and, as a result, more intelligent.

The relationship between IQ and motion suppression points to the fundamental cognitive processes that underlie intelligence, the authors write. The brain is bombarded by an overwhelming amount of sensory information, and its efficiency is built not only on how quickly our neural networks process these signals, but also on how good they are at suppressing less meaningful information. "Rapid processing is of little utility unless it is restricted to the most relevant information," the authors conclude.

The researchers point out that this vision test could remove some of the limitations associated with standard IQ tests, which have been criticized for cultural bias. "Because the test is simple and non-verbal, it will also help researchers better understand neural processing in individuals with intellectual and developmental disabilities," says co-author Loisa Bennetto, an associate professor of psychology at the University of Rochester.

Bryan Harrison, a doctoral candidate in clinical and social psychology at the University of Rochester is also an author on the paper. The research was supported by grants from the National Institutes of Health.