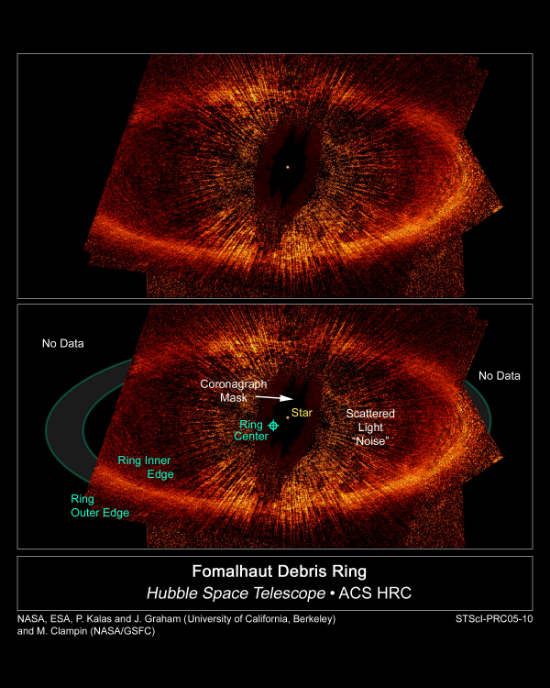 A young star's strange elliptical ring of dust likely heralds the presence of an undiscovered Neptune-sized planet, says a University of Rochester astronomer in the latest Monthly Notices of the Royal Astronomical Society.

Stars in the early stages of life are surrounded by dust clouds that thin out and dissipate as the star reaches maturity, becoming rings in their final stages. One star, however, has a dust ring that has long puzzled astronomers because it is not centered around the star as usual. Instead, the ring is elliptical, with the parent star off to one side.

"We wanted to know why this ring was off-center," says Alice C. Quillen, Associate Professor of Astronomy and author of the study. "People guessed there might be a planet in there, but nobody knew where it might be, or how big it might be. Now we've got a very good idea."

Roughly 250 planets have been discovered so far around stars other than our Sun. Most have been revealed by the way the planets influence their parent stars, but Quillen has been working for years on understanding the delicate interaction between stellar dust disks and the planets that shape them. She is now one of the world's experts in predicting planet size and position from the features of a star's dust ring.

Quillen used new images from the Hubble Space Telescope that caught the star, Fomalhaut, and its surrounding ring almost edge-on and in more detail than ever before. Fomalhaut, 25 light-years away, is the brightest star in the autumn sky. Using a device called a coronagraph that blocks out a star's light so dimmer objects near it can be seen, the Hubble revealed that Fomalhaut was indeed off-center within its ring. The images were also clear enough to show that the ring itself had a surprisingly sharp edge.

That sharp edge was the clue Quillen was looking for. Since ascertaining one of the first extra-solar planets using dust-ring analysis in 2002, Quillen has greatly strengthened her planet-ring interaction models. Treating the ring like a hydrodynamic structure, for instance, is necessary for younger stars whose dust is relatively fine and acts more like a fluidwhile the physics of dust collision become dominant in older ring systems where the dust has begun clumping into larger bodies.

The sharp inside edge of Fomalhaut, Quillen calculated, demanded that a relatively small, Neptune-size planet was tucked right up against the inner side of the ring, using its gravity to toss dust in the area out of orbit.

According to Quillen's calculations, the ring is elliptical because the Neptunian planet's own orbit around Fomalhaut is ellipticala curiosity in such a young system. When stars form from a giant cloud of gas and dust, the angular momentum of the cloud carries over to all the objects that form from the cloud, including new planets. Those new planets should, initially at least, orbit in nice, circular pathsnot elliptical ones. Fomalhaut's ring is offset by 1.4 billion miles, more than 15 times the distance from the Earth to the Sun, suggesting the hidden planet's orbit is also tremendously skewed.

"Something had to skew that planet, and that's what we're working on now," says Quillen. "There may have been fantastic planetary collisions early on that changed their orbits. We're working on figuring out how many more planets of what size you'd need to account for that elliptical orbit, and to account for why there is no other dust inside that ring."

Quillen's model will remain just a theory until a new generation of telescopes can actually see the Formalhaut planets in question. These telescopes will be equipped with sophisticated coronagraphs that can block out Formalhaut's light enough to let the planets themselves shine through.

This research was funded by the National Institutes of Science and NASA.