The team of mathematicians that first created the mathematics behind the "invisibility cloak" announced by physicists last October has now shown that the same technology could be used to generate an "electromagnetic wormhole."

In the study, which is to appear in the Oct. 19 issue of Physical Review Letters, Allan Greenleaf, professor of mathematics at the University of Rochester, and his coauthors lay out a variation on the theme of cloaking. Their results open the possibility of building a sort of invisible tunnel between two points in space.

"Imagine wrapping Harry Potter's invisibility cloak around a tube," says Greenleaf. "If the material is designed according to our specifications, you could pass an object into one end, watch it disappear as it traveled the length of the tunnel, and then see it reappear out the other end."

Current technology can create objects invisible only to microwave radiation, but the mathematical theory allows for the wormhole effect for electromagnetic waves of all frequencies. With this in mind, Greenleaf and his coauthors propose several possible applications. Endoscopic surgeries where the surgeon is guided by MRI imaging are problematical because the intense magnetic fields generated by the MRI scanner affect the surgeon's tools, and the tools can distort the MRI images. Greenleaf says, however, that passing the tools through an EM wormhole could effectively hide them from the fields, allowing only their tips to be "visible" at work.

To create cloaking technology, Greenleaf and his collaborators use theoretical mathematics to design a device to guide the electromagnetic waves in a useful way. Researchers could then use these blueprints to create layers of specially engineered, light-bending, composite materials called metamaterials.

Last year, David R. Smith, professor of electrical and computer engineering at Duke's Pratt School, and his coauthors engineered an invisibility device as a disk, which allowed microwaves to pass around it. Greenleaf and his coauthors have now employed more elaborate geometry to specify exactly what properties are demanded of a wormhole's metamaterial in order to create the "invisible tunnel" effect. They also calculated what additional optical effects would occur if the inside of the wormhole was coated with a variety of hypothetical metamaterials.

Assuming that your vision was limited to the few frequencies at which the wormhole operates, looking in one end, you'd see a distorted view out the other end, according the simulations by Greenleaf and his coauthors. Depending on the length of the tube and how often the light bounced around inside, you might see just a fisheye view out the other end, or you might see an Escher-like jumble.

Greenleaf and his coauthors speculated on one use of the electromagnetic wormhole that sounds like something out of science fiction. If the metamaterials making up the tube were able to bend all wavelengths of visible light, they could be used to make a 3D television display. Imagine thousands of thin wormholes sticking up out of a box like a tuft of long grass in a vase. The wormholes themselves would be invisible, but their ends could transmit light carried up from below. It would be as if thousands of pixels were simply floating in the air.

But that idea, Greenleaf concedes, is a very long way off. Even though the mathematics now says that it's possible, it's up to engineers to apply these results to create a working prototype. 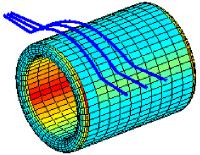 Light flowing around the metamaterial "tunnel" 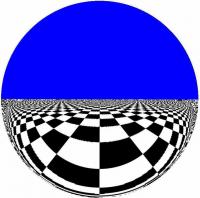 One of the views through the "wormhole." Different lengths result in different bending of light