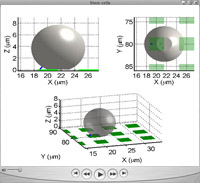 Movie: How stem cells are made to roll inside device 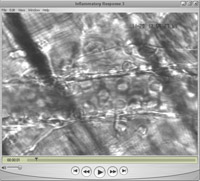 A tiny, implantable device has pulled adult stem cells out of a living rat with a far greater purity than any present technique.

The test of the device designed by Michael R. King, associate professor of biomedical engineering at the University of Rochester, will be reported in the March 3 issue of the British Journal of Haematology.

"It's the kind of research that, before we tried it, we never would have expected such a remarkable result straight out of the gate," says King. "We're finding we can play off the hydrodynamics of moving blood to isolate and manipulate specific cell populations with great efficiency."

King is at the forefront of a new field; manipulating stem cells, white blood cells, and even cancer cells by exploiting the mechanics of the cells' movement with such precision that he is having success capturing and even reprogramming several cell types as they pass through the device, he says.

A chance encounter between an engineer and a hematology clinician gave rise to the field in 2002. King was studying how certain white blood cells, called neutrophils, know how to migrate to a point of infection. He observed how, near an injury site, the walls of the nearby blood vessels expressed an adhesive protein called a selectin, and if passing neutrophils brushed against these selectins, they stuck to the vessel wall.

But the cells did not remain stuckthey rolled. With a precise balance between the adhesion of the selectins and the forces of the flowing bloodstream, the cells could move much more slowly as they approached the infection site. With that slowed pace, the cell can look for a second signal on the vessel wall that tells the cell to exit the vessel by squeezing between cells in the wall and moving directly to the site of infection.

One reason the system is so effective is that only the neutrophils respond to those selectins, so only neutrophils slow down in the blood.

King was working out the physical dynamics of this neutrophil rolling in his office one day when Jane Liesveld, a hematology clinician doing work on bone marrow stem cells at the University of Rochester, walked by and noticed a poster of King's work in the hallway outside his office.

"She dropped in and said, 'I have a pretty plentiful source of primary stem cells from patients. Can you think of any biophysical research to do with that?'" says King. "The stem cell angle just fell from the sky."

As King worked with Liesveld he found that the basic rolling mechanism was the foundation of a number of other processes, including stem cell transplantationa natural phenomenon where stem cells move in and out of bone tissue via the blood. In 2004, he found that he could coat a material with specific adhesive selectins and capture living stem cells. This collaboration resulted in two human stem cell papers published just within the last month: in Biotechnology Progress (Charles et al., 2007) and Clinical Chemistry (Narasipura et al., 2007).

In the new British Journal of Haematology paper, King and colleagues show they can take the process a step further by implanting the device in a living rat with the selectin coating remaining active for 1-2 hours. When the tube was removed, King found he'd indeed captured cells straight out of the bloodstream, including contaminantsnon-stem cellsas expected. What he didn't expect was how many of the cells were viable stem cells.

King points out that centrifugal methods currently produce an overall higher stem cell yield because they start with far more blood material, but he believes his microscale device can be scaled up to significantly larger capacity.

King is even more enthusiastic about his work in reprogramming cells that pass through his device. As the cell rolls across the adhesive surface, it can be forced to contact other proteins on the surface. King says these proteins can be designed to steer a stem cell's development, forcing it to become a specific type of blood, bone, or muscle cell.

King hopes someday an implantable device could continuously reprogram errant neutrophils, but he is already hard at work on a device that holds the same promise for cancerous cells.

Cancer cells use the same rolling mechanism to travel around the body and lodge in interstitial tissue, so King has already focused on isolating the selectins that cancer cells respond to. His lab is working to create a microscale tube that might attract cancer cells and use "permanent" receptor-mediated triggering proteins to reprogram them to self-destruct. With his microscale tube device, King has already verified that he can control the rolling adhesion of various types of cancer cells, including leukemias, prostate, retinoblastoma, and colorectal cancer cells.

"One of our ultimate goals is to develop an implantable device that will selectively remove metastatic cells from the blood," says King. "Those cells can predate detectable tumors by years, so we might catch them before they become dangerous."

This research was funded by the New York State Foundation for Science, Technology and Innovation, and by CellTraffix, a company in which King holds a financial interest. Other authors on the British Journal of Haematology paper include University of Rochester postdoctoral students Joel C. Wojciechowski and Srinivas D. Narasipura, doctoral student Nichola Charles, Deanne Mickelsen, laboratory technician, and Martha L. Blair, professor in the Department of Pharmacology and Physiology.

Closeup of how selectins work inside microtube 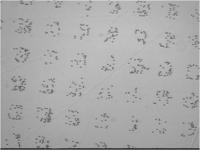