'Dark Cells' of Living Retina Imaged for the First Time

A layer of "dark cells" in the retina that is responsible for maintaining the health of the light-sensing cells in our eyes has been imaged in a living retina for the first time.

The ability to see this nearly invisible layer could help doctors identify the onset of many diseases of the eye long before a patient notices symptoms. The findings are reported in today's issue of Investigative Ophthalmology and Visual Science.

"Our goal is to figure out why macular degeneration, one of the most prevalent eye diseases, actually happens," says David Williams, director of the Center for Visual Science and professor in the Institute of Optics at the University of Rochester. "Macular degeneration affects one in 10 people over the age of 65, and as the average age of the U.S. population continues to increase, it is only going to get more and more common. We know these dark retinal cells are compromised by macular degeneration, and now that we can image them in the living eye, we might be able to detect the disease at a much earlier stage."

In 1997, Williams' team was the first to image individual photoreceptor cells in the living eye, using a technique called adaptive optics, which was borrowed from astronomers trying to get clearer images of stars. To image the dark cells behind the photoreceptors, however, Williams employed adaptive optics with a new method to make the dark cells glow brightly enough to be detected.

The cells, called retinal pigment epithelial, or RPE cells, are nearly black, and form a layer that recharges the photoreceptor cells of the eye after they are exposed to light, Williams explains. The photoreceptors contain molecules called photopigments. When light strikes these molecules, they absorb the light and change shape, sending a signal to the brain indicating they've "seen" light.

Given their critical role supporting the photoreceptors, Williams says that scientists will benefit from being able to image RPE cells in patients to see what is malfunctioning in individual cells.

To see these dark cells, Williams and his colleagues Jessica Morgan, postdoctoral fellow at the University of Pennsylvania, Alf Dubra, postdoctoral fellow in Williams' laboratory, Bob Wolfe, technical associate in Williams' laboratory, and Bill Merigan, professor of Ophthalmology, Visual Science, and Brain and Cognitive Sciences at the University of Rochester, exploit a trait of the toxic chemicals the RPE were collecting from the photoreceptors.

"These nasty chemicals fluorescethey glow just a little under the right conditions," says Williams. "When you shine blue or green light into the eye, the chemicals in the RPE shine back green and yellow. It's an incredibly dim glow, but when we use adaptive optics, we can take pictures of these chemicals in individual RPE cells."

Williams says many scientists believed imaging single RPE cells in the living eye would be impossible. He says he wasn't even convinced it could be done. When he and his team imaged the first photoreceptors in 1997, the RPE cells appeared pitch black.

Williams and his team now hope to learn exactly how RPE cells are related to macular degeneration. At the moment, scientists aren't sure how the disease starts, but being able to monitor the health of individual RPE cells may help doctors begin to piece together a picture of what mechanisms are malfunctioning in the retina. Williams also says that since the technique may eventually be able to spot illness in the RPE long before the patient experiences symptoms, doctors could start patients on therapies early enough to possibly slow or stop the onset of macular degeneration. Currently, when a patient begins treatment, a great deal of irreparable damage has been done.

This research was funded by the National Institutes of Health. 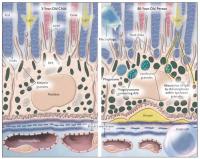