'Hot Blues for the Homeless' Concert: A Tribute to 'Son' House

Bluesman Eddie "Son" House, who lived in Rochester for three decades, will be paid tribute by local and nationally recognized musicians at a benefit concert for the homeless on Sunday, June 7 at the Water Street Music Hall in Rochester.

"Son House stands in the first rank of Mississippi Delta Blueshe was a peer of Charley Patton and Willie Brown, and a teacher of Robert Johnson and Muddy Waters," says Dan Beaumont, a University of Rochester professor and author of Preachin' the Blues: The Life and Music of Son House, a forthcoming biography about the seminal bluesman to be published by Oxford University Press. "After Son House revived his career in 1964, he became the most important living link with that form of the blues, which had by then begun to change the shape of popular music," adds Beaumont, who teaches a course called simply "The Blues."

To honor that influence, noted blues musicians such as John Hammond, Joe Beard, Chris Beard, Steve Grills, Fred Vine, Gordon Munding, and Curtis Waterman will play at "Hot Blues for the Homeless: A Tribute to Son House" at the Water Street Music Hall, located at 204 N. Water St. from 4 to 9 p.m.

Proceeds from the concert will be donated to Catholic Family Center's Francis Center to directly benefit men in crisis through the construction of a permanent housing facility for homeless men, which will include a life and vocational facility to be called the Son House Resource Center. Last year's benefit concert, featuring national and local musicians, raised $10,000 for the construction of the center.

"We have been seeing an increase in homeless men this year due to lack of affordable housing, job layoffs, downsizing, complicated by an increase in depression and substance abuse due to the downturn in the economy," says Sue Barnes, funds development coordinator for homeless and housing with Catholic Family Center of Rochester. "This amazing event provides an opportunity for an empathetic Rochester music communityresidents, musicians, businesses, educational and other organizationsto join together for a solution of hope."

Born in Riverton, Miss., House was determined to become a Baptist preacher. He took up the calling at age 15, but soon became attracted to the blues, regarded by the church as "the devil's music." Inspired by legend Willie Wilson, he taught himself guitar, playing beside bluesmen like Charley Patton and Willie Brown. "He found himself forced to make a choice between preaching and playing," says Beaumont, a professor in the religion and classics department, who will be reading from his upcoming book at the Water Street Music Hall on June 7 at noon.

In 1927, House allegedly killed a man at a "frolic" or house party. House claimed self-defense, but was sentenced to Parchman Farm Prison in 1928. After his release, he recorded groundbreaking work for Paramount Records in 1930, and later for musicologist Alan Lomax from the Library of Congress in 1941 and 1942.

House left Mississippi in 1943 and moved to Rochester. He also left music. After 21 years in obscurity, he was "rediscovered" in June 1964 by three young, white fans, who tracked him down at his Rochester home on 61 Grieg St.

The saga of the artist speaks to the African-American experience, such as migration from south to north, as well as issues of American modernity, according to Jeffrey Tucker, associate professor of English and director of the Frederick Douglass Institute for African and African-American Studies at the University. "The enthusiasm for further knowledge about House and for the blues in general here at the University and throughout the greater Rochester Community is quite evident, and the event promises to grow in scope and in notoriety," says Tucker.

For information on events associated with the concert, including guitar workshops, a panel discussion, and a Son House film screening, please visit www.sundayblues.org/sonhouse. To purchase tickets, visit www.sundayblues.org/sonhouseblues, www.ticketmaster.com, the Bop Shop, Abilene, Record Archive, and Mercury Posters. Advance concert tickets cost $15 or $20 at the door. Both the concert and a June 7 guitar workshop featuring Fred Vine costs $25. For further information on the workshop visit http://sonhouse.sundayblues.org/Events.html.

Sponsors of the concert include Jazz 90.1, Catholic Family Center, House of Guitars, the Music Theory department of the Eastman School of Music, and the University of Rochester's Frederick Douglass Institute, established at the University in 1986 to promote the development of African and African-American studies in undergraduate and graduate education and through advanced research.

More on “'Hot Blues for the Homeless' Concert: A Tribute to 'Son' House” 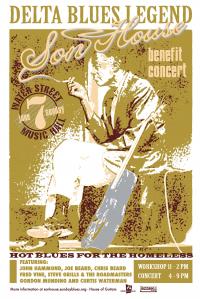 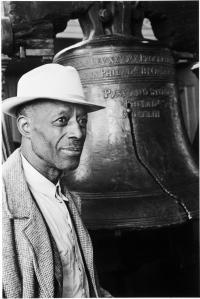