Video Games Lead to Faster Decisions that are No Less Accurate 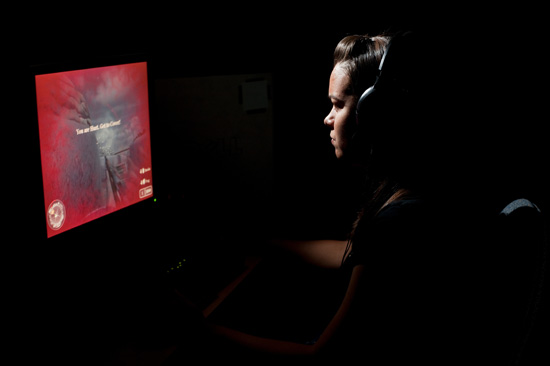 'A test subject attempts to determine whether the erratically moving dots on a computer screen are moving left or right on average during a study at the University of Rochester August 24, 2010. This was one task used by UR professor of brain and cognitive science Daphne Bavelier and colleagues in their study, "Improved probabilistic inference as a general learning mechanism with action video games", to determine whether playing video games makes people faster decision makers while having no detrimental effect on accuracy.'

Cognitive scientists from the University of Rochester have discovered that playing action video games trains people to make the right decisions faster. The researchers found that video game players develop a heightened sensitivity to what is going on around them, and this benefit doesn't just make them better at playing video games, but improves a wide variety of general skills that can help with everyday activities like multitasking, driving, reading small print, keeping track of friends in a crowd, and navigating around town.

In an upcoming study in the journal Current Biology, authors Daphne Bavelier, Alexandre Pouget, and C. Shawn Green report that video games could provide a potent training regimen for speeding up reactions in many types of real-life situations.

Video games have grown in popularity to the point where 68 percent of American households have members that play them, according to a 2009 report by the Entertainment Software Association.

After this training period, all of the subjects were asked to make quick decisions in several tasks designed by the researchers. In the tasks, the participants had to look at a screen, analyze what was going on, and answer a simple question about the action in as little time as possible (i.e. whether a clump of erratically moving dots was migrating right or left across the screen on average). In order to make sure the effect wasn't limited to just visual perception, the participants were also asked to complete an analogous task that was purely auditory.

The action game players were up to 25 percent faster at coming to a conclusion and answered just as many questions correctly as their strategy game playing peers.

Participants in a University of Rochester study, "Improved probabilistic inference as a general learning mechanism with action video games", by UR professor of brain and cognitive science Daphne Bavelier played 50 hours of video games over multiple weeks. Players who played action games like Call of Duty 2 (pictured here) made quicker decisions than those who played slow-paced strategy games like The Sims without sacrificing accuracy.

"It's not the case that the action game players are trigger-happy and less accurate: They are just as accurate and also faster," Bavelier said. "Action game players make more correct decisions per unit time. If you are a surgeon or you are in the middle of a battlefield, that can make all the difference."

The authors' neural simulations shed light on why action gamers have augmented decision making capabilities. People make decisions based on probabilities that they are constantly calculating and refining in their heads, Bavelier explains. The process is called probabilistic inference. The brain continuously accumulates small pieces of visual or auditory information as a person surveys a scene, eventually gathering enough for the person to make what they perceive to be an accurate decision.

"Decisions are never black and white," she said. "The brain is always computing probabilities. As you drive, for instance, you may see a movement on your right, estimate whether you are on a collision course, and based on that probability make a binary decision: brake or don't brake."

Action video game players' brains are more efficient collectors of visual and auditory information, and therefore arrive at the necessary threshold of information they need to make a decision much faster than non gamers, the researchers found.

The new study builds on previous work by Bavelier and colleagues that showed that video games improve vision by making players more sensitive to slightly different shades of color.

The Daily Mail
Video gaming BOOSTS your ability to concentrate in a crisis.
(November 18, 2010)