Ching Tang, the Doris Johns Cherry Professor of chemical engineering in the University of Rochester's Hajim School of Engineering and Applied Sciences, has been awarded the Wolf Prize in the field of chemistry. The prize, which is given annually by the Wolf Foundation, is widely considered second in prestige to the Nobel Prize. In the 33 years that the Wolf Prize has been awarded, one out of every three scientists to win it in physics, chemistry, and medicine has gone on to win the Nobel Prize. Tang shares the 2011 prize with Professor Stuart Alan Rice of the University of Chicago, and Professor Krzystof Matyjaszewski of Carnegie Mellon University.

Tang is the inventor of the organic light-emitting diode (OLED), which gave birth to a multi-billion-dollar industry. The diodes have been used to create displays in cell phones, computers, and televisions that are much more energy efficient, thinner, and offer a clearer picture than LCD displays. LCD displays still dominate the commercial market, but OLEDs are quickly becoming more prevalent in devices like smart phones as the technology has improved. When he published his seminal paper on the technology in 1987 in the journal Applied Physics Letters, Tang was employed by the Eastman Kodak Company. To this day, that paper has been cited by more scientists than any other paper in the history of the well-regarded journal.

"The Wolf Prize is internationally renowned, and the announcement today that Ching Tang will share the 2011 Wolf Prize in Chemistry is a great honor for Professor Tang, for our department of Chemical Engineering and Hajim School of Engineering and Applied Sciences, and for the entire University of Rochester family," said University President Joel Seligman. "The Wolf Foundation has called his work 'spectacular,' and anyone who has seen the new OLED displays derived from his work will certainly agree. But perhaps the best news of all is that Professor Tang continues to teach, as he is this afternoon, and he continues to perform cutting-edge research, with his latest work promising significant advances in the field of photovoltaics and solar energy. We could not be more proud of Ching Tang and his continued achievements."

In addition to the discovery of OLEDs, Tang has been credited with a number of key innovations leading to the commercialization of new flat-panel display technology, including the development of robust luminescent materials, novel color pixilation methods, fabrication processes for the manufacture of OLED displays, and the adaptation of technology for high-definition OLED displays.

Tang also is widely recognized for his seminal early work in photovoltaics, which could lead to major improvements in the ability to produce low-cost solar cells to capture energy from the sun.

"This is great news, and yet another appropriate honor for Ching Tang's very impressive past work," said Robert Clark, dean of the University's Hajim School of Engineering and Applied Sciences. "But I have to say, knowing what Ching is working on currently, and how he is expanding his previous work now into solar energy applications, I am even more excited every time I think about the discoveries that will be coming out of his lab in the years ahead."

The Prize will be awarded by the President of Israel and the Israeli Minister of Education, at a special ceremony at the Knesset on May 29. The official citation for the three men reads: "For deep creative contributions to the chemical sciences in the field of synthesis, properties and an understanding of organic materials; for exploring the nature of organic solids and their energy profiles, structure and dynamics and for creating new ways to make organic materials, ranging from polymers, to organic-based devices that capture energy from the sun, and light our way in the dark; and for groundbreaking conceptual and experimental advances that have helped to create the research field of organic materials."

Prior to joining the University of Rochester in Fall 2006, Tang was a Distinguished Research Fellow at Eastman Kodak Company. He is a member of the National Academy of Engineering and a fellow of the American Physical Society and the Society for Information Display. He holds more than 70 U.S. patents and has published 70 papers.

Pittsburgh Tribune Review
CMU professor may be on road to Nobel
(February 18, 2011) 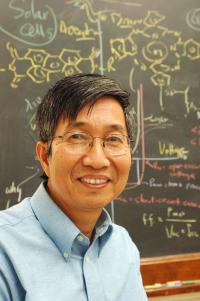