Alumnus David Liebers '09 was recently selected to receive the prestigious Gates Cambridge Scholarship. Supported by the Bill and Melinda Gates Foundation, the scholarship provides one to three years of graduate study at the University of Cambridge, England. Liebers is one of the 30 U.S. students, and is the first University of Rochester student or alumnus to receive this award since the program began in 2001.

Liebers also was selected to receive a 2011 Fulbright Scholarship to complete a master of arts at the University of Leeds' Centre for History and Philosophy of Science. He received the sole Fulbright/Leeds partnership award in this year's UK competition.

After careful consideration, Liebers has accepted the Gates Cambridge Scholarship and will pursue a master's degree in history and philosophy of science.

"The study of evolutionary biology, the history of science, and work in genomics spark what I see are among the most pressing questions about scientific progress," Liebers says of his research study project. "How do we, as a society, most responsibly use the data that will come from human genomics?"

A member of Phi Beta Kappa, Liebers' research in the history department earned him several accolades. He studied the intellectual history of science under Professor Theodore Brown and earned the highest distinction for his honors thesis, Self-made Men of the Atlantic: Benjamin Franklin and Olaudah Equiano, a study that looked at the political use of autobiographies among educated elites in the 18th century transatlantic world. Liebers, who served as president of the Undergraduate History Council, also was named a Christopher Lasch Fellow and was given the N.B. Ellison Prize, which recognizes the excellent quality of work done by seniors in the department.

Liebers has spent the last few months in Warsaw, Poland, interning with the Freedom and Democracy Foundation, and teaching English to a classroom of six-year-olds. The environment is appropriate, as Liebers himself seems to explore life with the same zeal and energy as the young children he teaches.

Since graduating from Rochester in 2009, Liebers has traveled extensively throughout Eastern and Western Europe. He first went to Warsaw in 2010 as a Humanity in Action (HIA) Foundation Fellow where he studied international human rights and minority populations within majority societies. Additionally, Liebers has won a grant from the U.S. Embassy in Warsaw and HIA to begin an oral history project on recognized minority groups in Poland.

Liebers, who is a native of Niskayuna, N.Y., plans to attend law school after the completion of his master's degree, with the intention of pursuing a career as a legal academic.

Interested in learning more about Rochester's newest scholars? Visit www.rochester.edu/news for updates and profiles of each student. 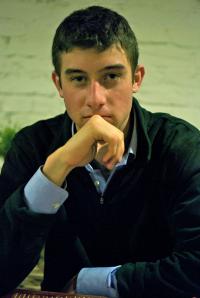