Rochester, N.Y.The winning titles and translators for this year's Best Translated Book Awards were announced on Friday, April 29, at the Bowery Poetry Club as part of the PEN World Voices Festival. In poetry, Ale teger's The Book of Things, translated from the Slovenian by Brian Henry, took the top honor. In fiction, the award went to Thomas Teal's translation from the Swedish of Tove Jansson's The True Deceiver.

Organized by Three Percent at the University of Rochester, the Best Translated Book Award, or BTBA, is the only prize of its kind to honor the best original works of international literature and poetry published in the United States over the previous year.

Lorin Stein, editor of the English translations of Roberto Bolaño's The Savage Detectives and 2666, and now publisher of The Paris Review, hosted the celebration, which was held in collaboration with the PEN World Voices Festival for the first time this year. Thanks to the support of Amazon.com, the awards came with $5,000 cash prizes for each winning author and translator.

"There's really no better time for this ceremony to happen," said BTBA co-founder Chad W. Post. "This festival is the premiere festival for international literature taking place in America today. And by highlighting two fantastic works of translated literature, the BTBA adds something special to the weeklong festivities."

Born into the small Swedish-speaking community in Finland, fiction winner Tove Jansson is most well-known for inventing the Moomins, a group of large-nosed creatures that starred in a series of children's books and a comic strip that Jansson worked on for almost 50 years. Toward the end of her life, she started writing books for adults, several of which have been recently translated into English and published by New York Review Books.

Jeff Waxman of the BTBA fiction committee describes Jansson's most recent English-language publication as "a slender and modern novel about the relationship of two women in a small Scandinavian fishing community: one is cold, practical, and brutally honest; the other is an older, infantile children's book illustrator. As the story unfolds in Jansson's simple, understated prose, Katri Kling strives to provide a home and perhaps a livelihood for her younger brother; Anna Aemelin wants only to live life with her eyes closed, insulated by her money and her art. This panel found itself engrossed as their relationship grew tense and aggressive and their fields of battle expanded from Aemelin's household finances to Katri's brother and her pet dog. Subtle, engaging and disquieting, The True Deceiver is a masterful study in opposition and confrontation."

The author of four books of poetry, The Book of Things is poetry winner Ale teger's first collection to be published in English translation. teger's book was published by BOA Editions as part of its "Lannan Translations Series," which was made possible by support from the Lannan Foundation.

"The poems in Ale teger's The Book of Things focus with nearly comic intensity on an array of everyday objectsan egg, a coat, a toothpick, a stomach. Here, a potato recollects the soil it came from. Or a hand dryer speaks a windy language we can't quite understand. Or a doormat forgives us all. But teger's poems go far beyond mere comic description, personification, or metaphor," said poetry committee member Kevin Prufer. "Rather, his objects reflect our own strange complexitiesour eagerness to consume, our rationalizations and kindness. Our many cruelties and our grandiosities. teger's The Book of Things is harrowing and hilarious, unnerving and weirdly familiarand, most of all, ambitious in its attempt to look anew into our all-too-human darkness. And translator Brian Henry (himself a poet of significant talent) renders these poems beautifully into an English that is both colloquial and disconcertingly plainspoken."

Each winning author and translator will receive a $5,000 cash prize thanks to the support of Amazon.com. The BTBA is one of several nonprofit programs supported by Amazon.com that are focused on bringing more great works from around the world to English-language readers. Other recipients include the PEN America Center Translation Fund, Words Without Borders, Open Letter Books, the Center for the Art of Translation, Archipelago Books, and the Ledig House International Writers Residency. 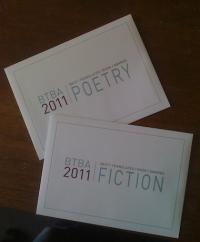