Garth Fagan, "one of the great reformers of modern dance," will launch the 25th anniversary celebrations of the University of Rochester's Frederick Douglass Institute for African and African-American Studies on Nov. 15 at 4 p.m. with a lecture and demonstration in the Spurrier Dance Studio on the University's River Campus. The event is free and open to the public.

The Fagan lecture demonstration ushers in a year of celebration for the Frederick Douglass Institute as it turns a quarter-century old. Founded in 1986, the institute promotes African and African-American studies at the University through a research oriented undergraduate major, residential scholarships, film series, lecture series, and conferences. The institute also sponsors postdoctoral and predoctoral fellows, many of whom will be invited to return to campus this year to share their scholarly work.

"When it comes to intellectual diversity, the Frederick Douglass Institute, for the past 25 years, has been part of the solution," said Cilas Kemedjio, director of the institute and associate professor of French and Francophone studies. "FDI has contributed to the development of graduate students and young scholars who have gone on to make significant contributions to the scholarship and teaching of African and African-American Studies."

The Fagan lecture, which is cosponsored by the University's program of dance and movement and graduate program in visual and cultural studies, continues the institute's tradition of bring emerging and established leaders to campus. Fagan is admired for his original choreography, which weaves together disparate dance traditions: the sense of weight in modern dance; the torso-centered movement and energy of Afro-Caribbean; the speed and precision of ballet; and the rule-breaking experimentation of the post-moderns. Both popularly and critically acclaimed, Fagan has been showered with recognition for his dynamic choreography of Walt Disney's The Lion King, earning the Olivier, the Tony, the Helpmann, and the Ovation awards, among others, for that work. More recently, Fagan's Mudan 175/39 was named the third top dance performance of 2009 by The New York Times. 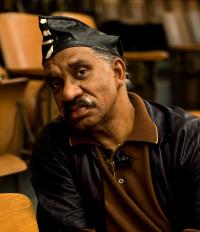 Garth Fagan is admired for his original choreography, which weaves together the sense of weight in modern dance; the torso-centered movement and energy of Afro-Caribbean; the speed and precision of ballet; and the rule-breaking experimentation of the post-moderns.