Two members of the University of Rochester's Fraternity and Sorority Affairs (FSA) unit within the Office of the Dean of Students were honored during the Association of Fraternity/Sorority Advisors (AFA) annual meeting in St. Louis, Mo., last month. The AFA is a professional organization for individuals concerned with the advisement of fraternities and sororities.

John DiSarro, assistant director of Fraternity and Sorority Affairs at Rochester, was awarded the 2011 Essentials Award for an article he wrote for AFA's monthly e-newsletter, Essentials. DiSarro's article, titled Using Restorative Circles to Resolve a Fraternal Crisis, was included in the June 2011 issue and explored the lessons learned from incorporating alternative dispute resolution processes in FSA's judicial procedures. The Essentials Award recognizes authors who have written thought-provoking pieces that present relevant and practical ideas to AFA members. DiSarro's article was selected from a pool of more than 50.

Sands, a native of New Jersey, joined FSA in 2008 after completing a degree at Western Carolina University. At Western Carolina, she served as a Greek Assistant Resident Director, supervising and training a team of student house managers and managing the Greek Village Budget. She also was a graduate advisor for the College Panhellenic Council, where she coordinated formal recruitment efforts and served on the Greek Life Advisory Committee. Sands, who joined Gamma Phi Beta sorority as an alumnae initiate in fall 2009, is currently pursuing a degree from the Warner School.

Additionally, Monica Miranda Smalls, director of FSA at Rochester and AFA's outgoing president, ended her term by presenting the inaugural Monica L. Miranda Smalls Scholarship. Similar to the Marlin Bradley Ally Scholarship, this award is given to a young professional or graduate student and offsets the cost of attending the organization's annual conference. It is the first scholarship created that gives preference to members of culturally-based fraternities and sororities in an effort to increase access for underrepresented members of AFA.

Smalls, who was inducted as AFA's president in 2010, is a member of two other professional organizations, the NASPA: Student Affairs Administrators in Higher Education and the American College Personnel Association (ACPA). She has been actively involved with her sorority, Omega Phi Beta, for 18 years and served as the inaugural chair of the Board of Trustees from 2008 to 2009. Smalls also is enrolled in the educational leadership program at the Warner School of Education.

Founded in 1976, the Association of Fraternity/Sorority Advisors provides support and professional development for its 1,700 members by fostering partnerships across higher education and offering innovative resources and services to those involved in advising fraternities and sororities.

Office of Fraternity and Sorority Affairs 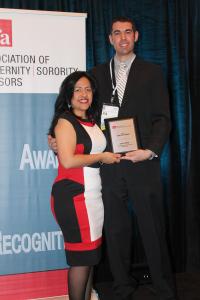